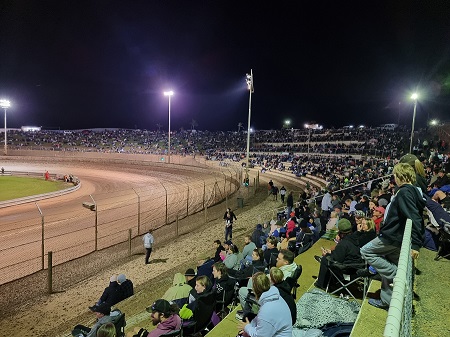 A huge crowd enjoyed the season finale at the Murray Machining and Sheds Murray Bridge Speedway
The Murray Machining and Sheds Murray Bridge Speedway hosted their final event of the season on Saturday night with the meeting featuring Wingless Sprints, Street Stocks, Junior Sedans, AMCA Nationals and the U-Pull-It Demolition Derby World Record Attempt. Infront of a massive, long-weekend crowd the fans were treated to an entertaining night of action with Jack McCarthy dominating in the Wingless Sprints before the crash and bash of the Demolition Derby took centre stage.

Unfortunately, the Demolition Derby failed to attract the number required to set a new record as it fell well short with 96 official entries taking to the track. This was a little disappointing considering that the venue was only 3 cars short of setting the record last season. The current record of 125 was set in Canada back in 2019.

Once all the carnage had unfolded it was regular Street Stock racer Steven Gartner who emerged as the winner of the U-Pull-It supported event. As the field began to be reduced Gartner was definitely the crowd favourite as he had them on their feet cheering for more as he also collected the “Most Damage” award in his #132 Hyundai Excel.

The Wingless Sprints “Club Show” was more like the “McCarthy Show” as he led all 20 laps of the A-Main along with winning both of his heat races, with his opening win of the night being by more than 9 seconds. Second across the line was Harley Alexander, who recorded a career best result, with Brett Ireland returning to form as he completed the podium. Anthony Tapley, Ryan Alexander, Rory Button, Michael Spoljaric, Brent Fox, Rylan Furler and Hayden Vickers completed the top 10.

In what was a disappointing end to his night Darryl “The Prez” Sloan rolled his bright yellow #8 in turn four while he was running in a podium position and was well on his way to having his best night of the season.

It was a familiar outcome in the final round of the Street Stock Track Championship with Carey Weston once again greeting the chequered flag first in the 20-lap final ahead of Nigel Reichstein, Craig Buchanan, Keith Moore and Ben Whitehead. Earlier both Reichstein and Weston claimed a heat win.

A field of only 5 AMCA Nationals fronted with Tasmanian Rodney Basset setting a new 20 lap Track Record of 5:05.553 in the final as he defeated Victorian Shannon Hilder, John Stumann and Darren McCarthy.

The Promotional Team at the Murray Machining and Sheds Murray Bridge Speedway would like to thank all of their staff, sponsors and volunteers for their hard work throughout the year. Planning is now underway for the 2022/23 season with the Opening Night scheduled for September 24, 2022. The first major announcement for next season has already been made with the Australasian 50 Lap Speedcar Championship over two nights at Easter (April 8 & 9). Further dates, including events for Sprintcars, will be released over the coming months.