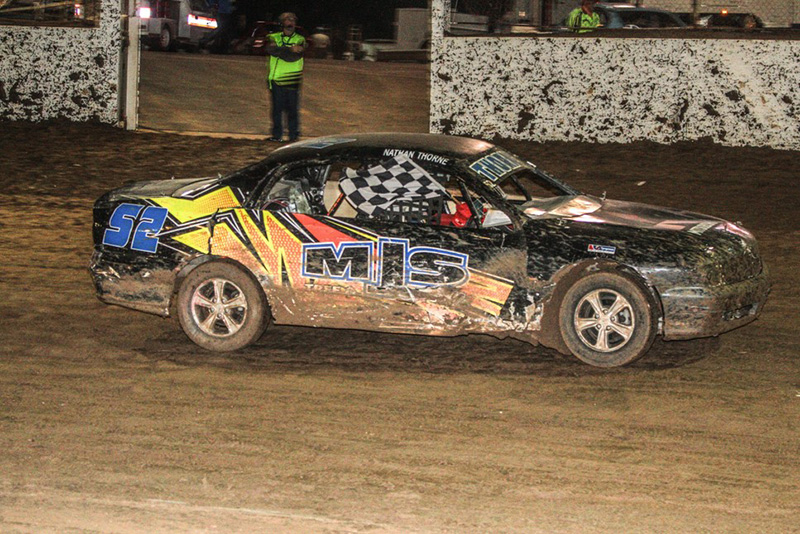 The eighth meeting of the Murray Machining and Sheds Murray Bridge Speedway season was held last Saturday night with an all-sections Club Show with the main categories on the night being the Wingless Sprints and Street Stocks.

The Wingless Sprints were once again out in force with a field of over 30 cars despite missing several competitors who were racing interstate. But that didn’t take anything away from the racing as it was once again of a high quality, and it produced a first-time winner as Ben Cartwright led all 20 laps in impressive fashion. Second place went to Ryan Alexander with Hayden Vickers enjoying a return to form as he completed the podium.

The Street Stocks saw the front wheel drive Magna driven by Nathan Thorne (pictured) claim the feature event honours ahead of Bailey Heinrich and Nigel Reichstein in what was a tough race. Carey Weston and rookie Drew Flatman rounded out the top 5 in the 15-car field. Drew Flatman, Bailey Heinrich and Nathan Thorne also dominated the heat races as they all claimed a heat win.

In addition to the Wingless Sprints the night also featured a second open wheeled class with the V6 Sprints on the schedule. Unfortunately, the numbers were down on recent events with 6 cars fronting for action with Damien Eve claiming the feature win. Rookie Jordan Grillet put in his best performance so far with a second placing ahead of John McKenzie, Renee Pfeiler and Kym Simon. Damien Eve and Kym Simon were the heat winners.

For the first time this season the AMCA Nationals and Late Models were on the racing program with small fields of each class in attendance.

In the AMCA Nationals it was Mildura’s Zack Tyson who was the standout winning the opening heat and the 15-lap feature. Former State Champion Jake Armstrong also won a heat race and was he was challenging for the lead in the final until a fluid leak forced the car infield. John Stumann would claim the runner-up spot.

A field of five cars fronted for the opening Late Model event with Mark McCarthy making a clean sweep of the night winning both heats and the final. At the competition of the feature McCarthy race time was just outside his own existing 15 lap track record. After missing the opening heat with an engine issue Mat Crimmins bounced back to record a solid second placing in the final ahead of Jason Robinson, debutante Steve Smith and Lee Rothe.

The Murray Machining and Sheds Murray Bridge Speedway will host the South Australian Late Model Championship over two nights on March 4 and 5.

The Junior Sedan field was the strongest of the season with the drivers being spit into Top and New Stars. The racing in the Top Stars was some of the best of season with the heat wins being shared by Ky McEwin and Henry Brumfield. The New Stars events were both secured by Lincoln King, but he was chased all the way by Beau Allman.

With the field combined for the final all fourteen drivers took the green and after a caution littered finale Aaron Tranter, who had been a late entry therefore he started his heats from the rear, greeted the chequered flag first ahead of Ky McEwin, Lachlan Brown, Henry Brumfield and Riley Grieg.

The next meeting on the Murray Machining and Sheds Murray Bridge Speedway season calendar will be another Club Show on January 22 featuring Wingless Sprints, Modlites, Street Stocks, Formula 500’s, Super Sedans, Modified Sedans, Late Models and V6 Sprints. Tickets for the event are on sale now via: www.speedwaytickets.com.au