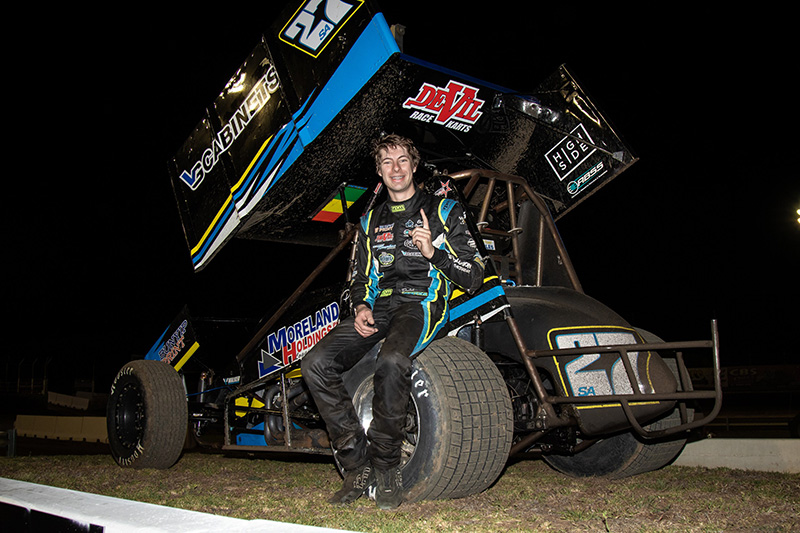 Saturday night saw the Sprintcars added to the Murray Machining and Sheds Murray Bridge Speedway schedule with 16 cars fronting for the Dare To Double Sprintcar Feature, which offered the front row the opportunity to double their prize money if they decided to start from the back of the A-Main field.

Following the heat races Brad Keller was the high points driver but he declined the offer giving Daniel Pestka the chance to go to the rear of the field. Pestka also decided to start up front and it paid off for the Strathalbyn based driver as he led all 30 laps to end Matt Egel’s winning steak at the venue. After starting from position four Egel would finish second with Keller rounding out the podium in third.

“The extra money that the track was putting up was a great idea to help out the teams and an exciting way to create some added interest for the fans, but we wanted to go for the win. The track tonight was really good, but it was going to be hard to pass so many good cars to get the win. My guys did a great job and I can’t thank Jamie and James Stark enough for allowing me to drive their car” added Pestka following the race.

Murray Bridge local Ryan Jones had a steady evening as he claimed fourth while Steven Lines returned to Murray Bridge for the first time in two years to record a solid top five result in the Dave Challons owned #45 J&J.

After destroying a car, the week prior Glen Sutherland rewarded his crew for the hard work they put in during the week bolting a new car together as he finished sixth while Mark Caruso, Lisa Walker, Joel Heinrich and Victorian David Donegan completed the finishers.

Unfortunately, a third of the starters failed to finish including Ricky Maiolo, who headed to the infield early and Luke Dillon, who had a huge moment in turn four with the car biking hard while running inside the top four.

Lap 11 of the feature event saw three cars taken out of the event after Luke Bowey spun in turn two before rolling over leaving Chris James and Brendan Guerin nowhere to go with both drivers colliding with the airborne #55. As a result, Guerin’s immaculate #96 Cool fell onto its side. Murray Bridge resident Mike Fox was a non-starter in the final after hitting the turn four wall in heat four.

Earlier the heat winners were Dillon, Keller, Heinrich and Sutherland while Dillon set the fastest time in qualifying with a lap of 11.549 seconds just edging out Keller’s lap of 11.666.

In the other events of the night, a somewhat smaller field contested the annual King of the Bridge with Angelo Karoussis taking out his fourth crown, ahead of Brendan Zadow and Josh Munn.

An eventful feature in the Street Stocks saw Carey Weston elevated to first place ahead of Drew Flatman, with first across the line Bailey Heinrich relegated two spots for an earlier racing incident.

Anthony Grillet, Scott Webb and Brian Chadwick were the top 3 placegetters in the Modlites 20 lap feature event, while Aaron Tranter made a a triumphant return in the Junior Sedans category amongst the largest field we have seen so far this season, ahead of Ky McEwin and Riley Grieg.

Racing at Murray Bridge Speedway now takes a short break before the Sprintcars SA/VIC States Series Round 1 on Boxing Day - Sunday, December 26th. Tickets for the event are on sale now via www.speedwaytickets.com.au