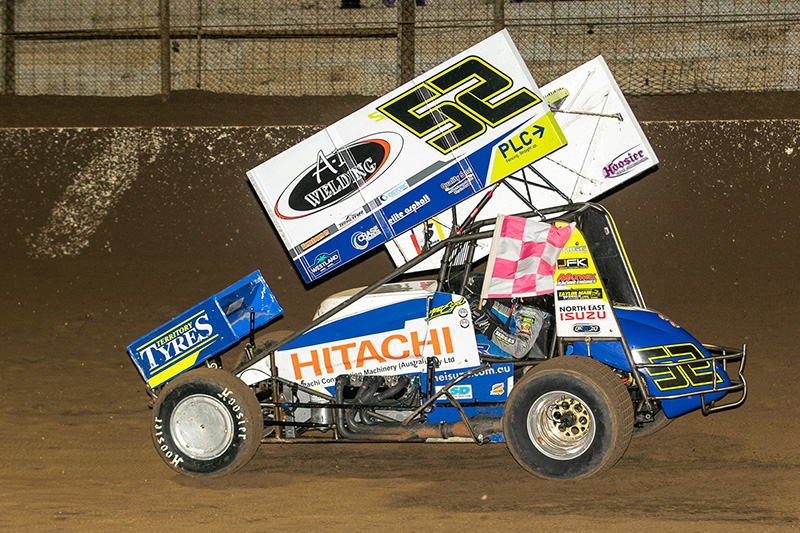 For the second time in as many starts this season at the Murray Machining and Sheds Murray Bridge Speedway Matt Egel dominated the 30-lap main event last Saturday night as he claimed the Ultimate Pink Night trophy on what was an ultra-fast racetrack. Second place went the way of Luke Dillon, who shadowed Egel for most of the race before Egel got away in lapped traffic, while Daniel Pestka completed the podium.

Following days of poor weather leading into the meeting the track crew did a fantastic job to prepare the track and despite a slight rain delay prior to the feature events the night was completed on time with some fast on track action.

The opening round of heats saw the fastest drivers line up at the front of the field, but it was Matt Egel, who started from position three, who charged to the front and reset a three-year-old track record as he completed the 10 laps in 1:53.413. Jones, Pestka, Steven Caruso and Mark Caruso rounded out the top five.

The second heat saw the red lights come on shortly after the green as Clinton Warner slammed the turn one wall rolling his #36 ending his night. Brad Keller would go on to win the heat ahead of Luke Dillon, Joel Heinrich, Glen Sutherland and Hayden Pitt. On the final lap Ricky Maiolo hit the turn two wall ending his race and the damage would keep him out of his second heat.

Even with the field inverted for round two Egel managed to race his way to the front in heat three with Lachlan McDonough driving well to hold onto second with the Ford powered Cool of Keke Falland finishing third. The final heat saw Glen Sutherland defeat an impressive Joel Heinrich with Luke Dillon and Brad Keller following.

Egel would get the jump on the field ahead of Dillon, but the caution would come out on lap two as Jones and Pitt made contact in turn four with Jones heading to the infield with a broken shock and a flat left rear. Jamie Hendry would also retire with a flat left rear while Chris James would also park up his CT525 powered #12.

Once the race got back underway the race would go twenty-nine laps non-stop and with the track being so fast passing proved to be hard. The only time that Egel really came under attack was when he came up to lap Ricky Maiolo and with Ricky running the preferred line Egel found it hard to get by therefore the top four closed up but once he found a way past Egel used the clean air to eventually win by 1.6 seconds.

Dillon held onto second ahead of Pestka and Brad Keller, who set the fastest lap of the race. Glen Sutherland put together a great run to finish fifth ahead of Mark Caruso, Heinrich, Steven Caruso, Pitt, Falland, McDonough, Ricky Maiolo and Ryan Alexander.

In the other main event of the night, the V6 Sprints contested their annual Zeke Agars Classic with a competitive field of 9 cars nominating for the event. After sharing the heat wins between them, Nick Hall would get the better of Damien Eve in the 20-lap feature event, with Renee Pfeiler coming in for third.

Racing returns to Murray Bridge Speedway on Saturday, December 4th for the Sprintcars ‘Dare to Double’. The race format will see the top point-scorer having the option of a rear of field start, with the challenge of driving through the field in order to double their prize-money. Formula 500s will also be in action for one of their mainstay events on the SA racing calendar in the King of the Bridge, while the V6 Sprints will honour another champion in the Des James Memorial. Modlites, Street Stocks and Junior Sedans will also be on the program, with tickets for the event going on sale today via www.speedwaytickets.com.au