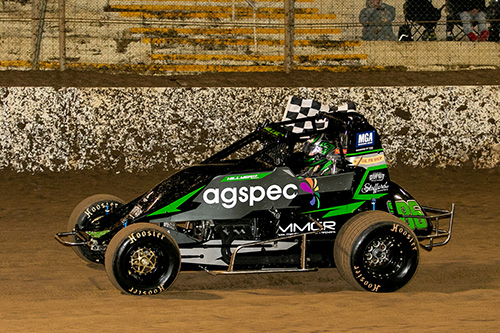 The South Australian Speedway season got underway on a cool Autumn evening last Saturday night at the Murray Machining and Sheds Murray Bridge Speedway with an all-sections event along with the U-Pull-It supported Demolition Derby. The main events on the racing program were the Wingless Sprints and Round 1 of the Barossa Hose Doctor Modified Sedan State Series.

A record opening night field of 25 Wingless Sprints ventured to Murray Bridge with the format including six heats, a B-Main and the 25-lap final.

In what was a fantastic way to kick off the season the race lead would change on five occasions and go flag to flag with Mount Gambier’s Kirby Hillyer defeating Hayden Vickers, Ryan Alexander, Matthew Kennedy and pole sitter Mitchell Broome.

Prior to the final the six heat winners were Mitchell Broome (2), Ryan Furler, Hayden Vickers, William Caruso and Cory Hodgson, with the final heat being the best of the night as Hodgson held out Ryan Alexander and Matthew Kennedy in a race long battle with the top three crossing the line just .543 of a second apart.

After dropping a heat Anthony Tapley was forced into the B-Main which he won easily ahead of Caleb Evans, Tamika Pitcher and debutante James Rodda.

Tony Hardy was dominant winner of Round 1 of the Barossa Hose Doctor Modified Sedan State Series leading all 15 laps. David “Snowy” Hartman made a successful return to Speedway competition with an impressive runner-up result in what was his Modified Sedan debut, while Rob Uren, Brandon Elphick and Justin Demaine rounded out the finishers.

The opening round of the South Australian Formula 500 State Series saw nine cars in action with heat wins going to Whyalla’s Angelo Karoussis and Bordertown’s Patrick Merrett. After two solid heat results (a second and a third) local Corey Jones looked set to claim the main event until a late race caution bunched the field. On the restart Karoussis pounced leading the final two laps to steal win over Jones. Brendan Zadow completed the podium ahead of Richard Schmidt, Nathan O’Shea and Simon Reichelt.

Nigel Reichstein opened up his winning account with a hard-fought win in the Street Stock final with Phil Watson, Michael Brown, Anthony Buchanan and Craig Buchanan completing the top five in the 13-car line-up. Phil Watson and Carey Weston (2) were the heat winners.

A small field of Super Sedans were also on hand to complete the racing program with only three cars making it to the finish line in the 15-lap finale. Following the deaths of former racers Graham Cowland and Tony Orlando the drivers were racing on the night in their honour. In a twist of fate both of their racing numbers, #42 and #99, were both represented in the field by Shane Lambe (42) and Mitchell Rigney (99).

Tickets for the event are on sale now via: www.speedwaytickets.com.au