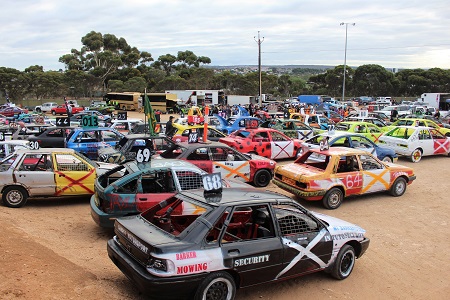 The curtain came down on the 2020/21 Murray Machining and Sheds Murray Bridge Speedway season last Saturday night with the venue falling just 3 cars short of setting a new Demolition Derby World Record. In all a total of 123 cars rolled out of the gate to take part but after an hour of carnage it was Mount Gambier’s Chris Warnock who survived to claim the win in front of the sell-out crowd in the U-Pull-It / Autopro Murray Bridge supported main event.

Along with the novelty of the Demo Derby World Record Attempt the night also featured a full racing program of Street Stocks, Super Sedans, Wingless Sprints and Modlites, with the main event being Round 4 of the MJS Street Stock Series.

As it does regularly the MJS Series attracted a quality line-up of 20 Street Stocks from across the State and Victoria with the format including four heats and a 30-lap final, with 15 laps being run in either direction. After securing his opening heat and finishing third in his second veteran Carey Weston would go on to win the final ahead of Jayden Edwards, who got the better of Nathan Thorne late in the race. Fourth place went to Heath Thorne with Albert Fell having a great run to round out the top five. Nigel Reichstein, Craig Buchanan, Bryan Brown, Jamie Owens and Aaron Tyler completed the top 10. After battling hard for the race win Sam Brumfield finished on the infield with an engine issue putting an end to what was an impressive drive.

In addition to Weston the heat winners were Sam Brumfield, Jayden Edwards and Nigel Reichstein.

The best racing of the night came from the Wingless Sprints as the 20-lap finale came down to a last corner pass as Anthony Tapley edged out race long leader Brad Evans with a stunning outside pass. Third place went to Bronson Mauro with impressive rookie Rylan Furler finishing fourth. At the chequered flag, the top four was only covered by .705 of a second. Brent Fox, Robert Heard, Mick Barker, Nicole Southby, Joel Chadwick and Melissa Crouch completed the top 10.

Victorian racer Jeremy Pearson had an expensive trip to Murray Bridge as he rode out a big roll over in turn 1 of the main event while Joel Chadwick had an uncharacteristic night after spinning in turn three of the feature and from that point, he was unable to recover as he was only able to climb back to ninth.

A field of six Super Sedans fronted for action at Murray Bridge after a lengthy absence from the venue with Kym Jury defeating Paul Blenkiron in what was a titanic 1 on 1 battle. Throughout the 15-lap finale they could hardly be separated as they raced side by side with pair bringing out the caution after they made contact in turn four with Blenkiron spinning. On the restart both drivers maintained their positions with Jury winning by .218 of a second. Third place went to Kym Cottrell with Neville Nitschke and rookies Shane Lambe and Sarah Pope completing the field.