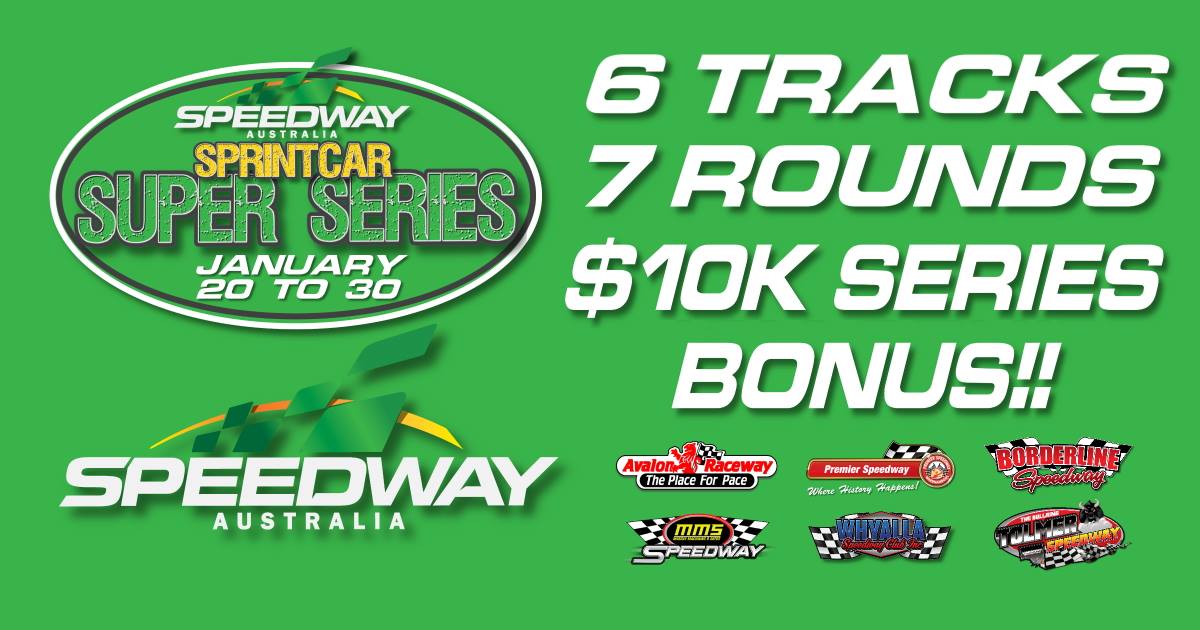 When COVID-19 robbed Sprintcar fans of World Series Sprintcars for season 2020-21, it seemed like the entire summer may be devoid of high end Sprintcar Action – Wrong!

Speedway Australia were quick to pro-actively commit some funding to three regions, usually associated with hosting World Series Sprintcars, to ensure that the Race Fans and Competitors alike didn’t miss out. South Australia and Victoria are set to turn up the heat at the end of January in what looks like being an exciting ten or eleven days at six different tracks!

With some excellent prizemoney already on offer, a $10,000 bonus for the overall leading points scorer will most definitely sweeten the deal for one lucky team. A further $10,000 to be shared between second, third, fourth and fifth place will act as incentive for those in the points battle to contest each and every night of competition.
For every one of the seven main events at the six different venues, 150 points will be awarded to the A-Main victor, with 146 for second, 144 for third etc. with all drivers starting an A, B or C Main to be allocated points!

The race formats will also vary throughout the week, keeping the teams and race fans on their toes and certainly adding some spice to the overall Speedway Australia Super Series action.

The Opening Night of the Sprintcar Super Series will be held at Avalon Raceway as a part of the $5,000 to win 2021 President’s Cup, which always acts as a prestigious heart starter for the Classic week!
From there all of the action will move across the border as Borderline Speedway, Mt. Gambier plays host to its 2021 version of the King’s Sprintcar Challenge as presented by Gambier Earth Movers, Stuckey Electrical, OG Roberts and Shelton’s Butchers. A very handy payday of $5,000 to the winner will be on the line at the always-exciting Borderline Speedway Bull Ring!

Rounds three and four will move back into Victoria at Sungold Stadium, Premier Speedway, Warrnambool. South West Conveyancing will present two nights of action-packed racing for the Fifty for 50 events, which will culminate in a 50 lap $15,000 to win A-Main event, to celebrate the Club’s 50th Anniversary at the current Allansford site!

With qualifying in randomly drawn heat groups on both nights, then one round of heats, the Fifty for 50 is sure to throw a mid-series cat amongst the pigeons as well!

Night one, will also carry some attractive prizemoney as $7,500 will be pocketed by the feature race winner as a part of a total two-night prize purse totaling nearly $100,000.

Monday January 25, 2021, will see the teams make the three hour haul to Bordertown in South Australia for what will be round five of the Sprintcar Super Series as Bordertown to continues to reward its loyal band of workers with some top quality Speedway action.

With another $5,000 to Win Feature event with thanks to Hi-Tec Oils, the Bordertown Bull Ring is sure to be pumping as the Sprintcars again invade South Australia after their sojourn in Victoria.

Australia Day on January 26, 2021 will see Murray Machining & Sheds Murray Bridge Speedway burst into life with yet another $5,000 to win event on the program, as the battle for overall Sprintcar Super Series honors reaches a crescendo in the penultimate round of the series to be known as the Rural City of Murray Bridge Australia Day Sprintcar Stampede as presented by the Rural City of Murray Bridge at that is arguably one of Australia’s most picturesque Speedway venues.

With time-trials, two rounds of heats and the main events, the penultimate round of the series is sure to deliver!

From there, it will be all eyes on the finale to the series as Whyalla Speedway in South Australia hosts the $5,000 to win City of Whyalla South Australian 410 Sprintcar Championship.

For those patrons wishing to catch the action at their nearest venue or perhaps wanting to follow the entire series, each venue will be selling their own ticketing packages so please log in to the website of each track for updates.

NOMINATION FORM (for the Murray Bridge Round): http://murraybridgespeedway.com/.../AustraliaDaySprintcar...

TICKETS: for the Murray Bridge Speedway round (Jan 26th) are available now from: www.speedwaytickets.com.au