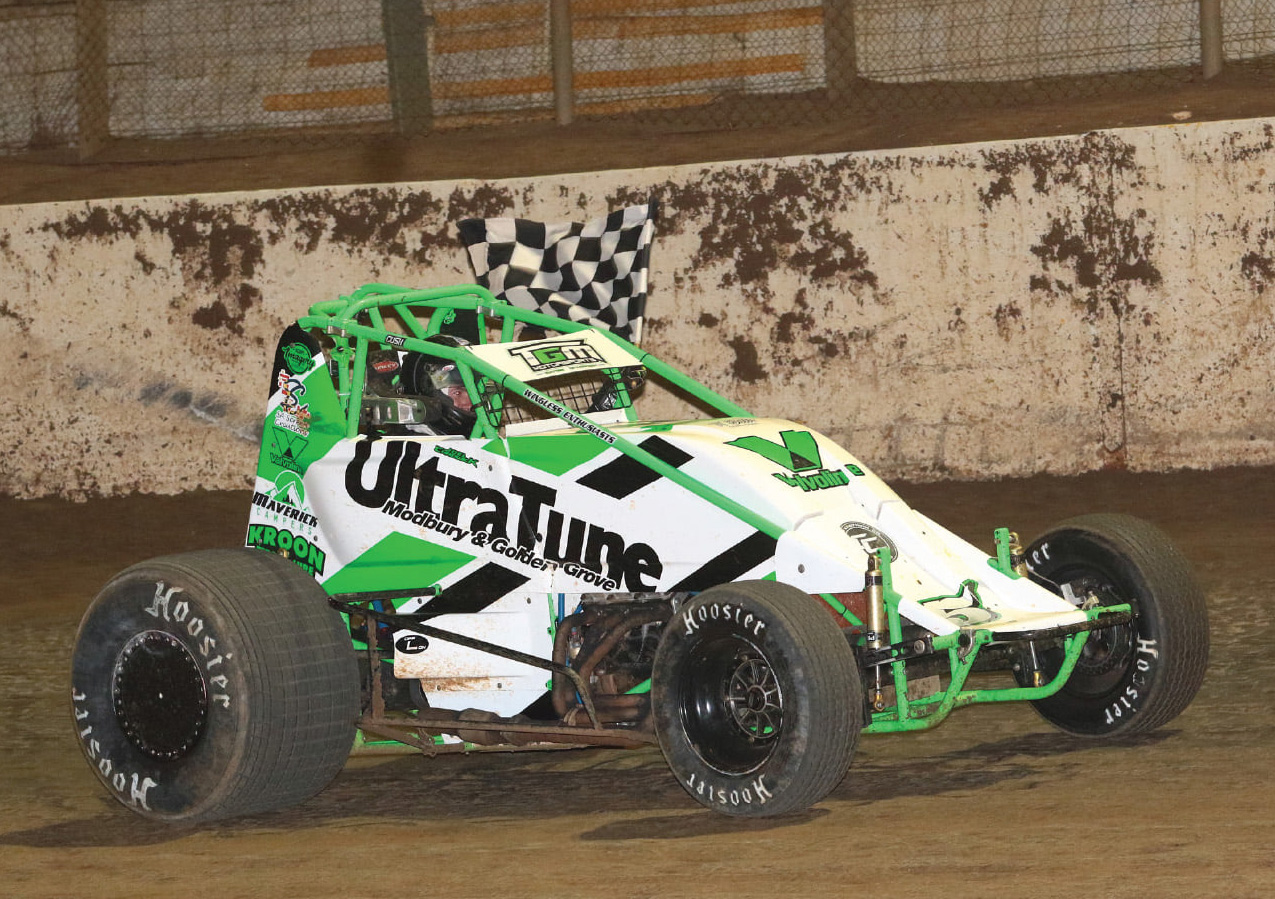 Joel Chadwick captured his fourth South Australian Wingless Sprint Championship in the most spectacular fashion on Saturday night at the Murray Machining and Sheds Murray Bridge Speedway with a last corner slider on Joel Heinrich. After starting from position six for the 30-lap decider Chadwick stormed his way into second early and then set out after race leader Heinrich before the duo put on a titanic battle throughout the final 10 laps with Chadwick finally getting the better of Heinrich in one of the best finishes to an A-Main at the venue in several seasons.

Despite Chadwick being the dominate force in the Wingless Sprint class in South Australia in recent years you could tell that the result meant a lot to the former Australian Champion as he was quite emotional at the post-race presentation.

“Before the race I didn’t think that I had the speed to win tonight. Joel (Heinrich) and Ryan (Alexander) were so fast in the heats, but we made a few changes and the car was as good as I have ever driven. As I began to close in, I was thinking I have a shot here and we got there. I have got to thank my Wife Alisha, my crew and all of my sponsors. I put a lot of pressure on myself to win these big races and I’m ecstatic that I achieved what I set out to do” added Chadwick as he accepted the winner’s trophy.

For the second time in his career Heinrich was the runner-up in the South Australian Championship, this time by a mere .126 of a second, with Victorian Glenn Watts rounding out the podium after capitalising on a late caution that set up a two-lap sprint to the end.
Jake Ashworth had a solid night as he finished fourth after starting on the fourth row while Ryan Alexander completed the top five, but he was set for a podium result but fell back two spots in the run to flag.
Dubbo veteran Mark Blyton had a frustrating run as he failed to move forward as expected, he finished sixth with Harry Ross, Luke Weel, Ash Cook and Tyson Martin completing the top 10 in the 20-car main event.

The hard luck stories of the main event were former Australian Champion Alex Ross and Jack McCarthy who were racing for third with three laps remaining only to be involved in an incident with the lapped car of William Caruso, ending their chance of a great result.
In all a total of 47 cars fronted for action with the field split into four groups, therefore the night consisted of 8 heats, a C and a B-Main prior to the Championship finale.

The Modlites produced some clean and fast racing with Michael Miller triumphant in their 20-Lap Feature, with Justin Chadwick in 2nd and Scott Webb in 3rd.

In the Street Stocks, a solid drive from Carey Weston saw him take out the feature win ahead of Bailey Heinrich and Sam Brumfield.
Wingless Sprint action returns this Saturday night at the Murray Machining and Sheds Murray Bridge Speedway with the running of the Wingless Sprints 60 Lapper. Formula 500s, Street Stocks and Classics will also be on the program. Tickets are on sale now via www.speedwaytickets.com.au