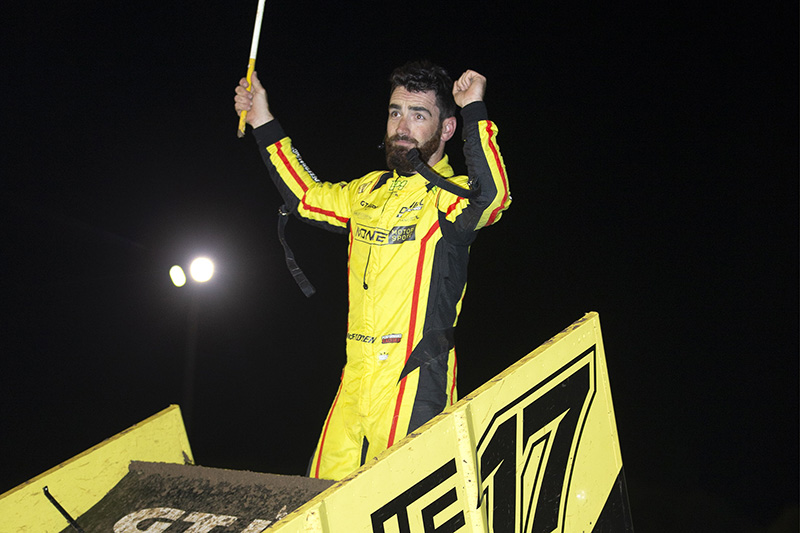 James McFadden claimed the A-Main in the Australia Day Sprintcar Stampede with a perfectly timed last lap dash to overtake pole-sitter Daniel Pestka - who had lead the first 29 laps of the 30 lap journey as part of the Speedway Australia Sprintcar Super Series.

Drivers were challenged with a extremely difficult track surface, with the venue experiencing heavy rains overnight, but it was Pestka who would take the lead early on, getting the jump alongside fellow pole-sitter Brad Keller.

An incident in Lap 8 saw Ryan Jones bounce through a rut in turn 2, seeing the #S63 roll, while also seeing Keller retire from his current second position

This would elevate McFadden to second, but Pestka had the speed to stay in front and make the best of the lapped traffic, maintaining his lead until the red lights came on again on Lap 15, this time for Dan Smith in turn four.

Unfortunately for Lisa Walker, her race would end here too, as the lapped car of Smith rolled right in front of Luke Dillon and Walker, who were racing for fourth, with Walker making contact with Dillon as he attempted to avoid the accident.

Pestka would lead away on the restart from McFadden, Egel, Dillon and Marcus Dumesney, and it remained this way until Lap 29 when McFadden made his move in Turn 1 to take the lead, going on to take the win.

The drama did not stop there, as just as McFadden had crossed the line, the red lights came on again once more with Ben Morris rolling in Turn 2; but the results were already official as the Top 2 had already received the chequered flag. Egel, Dillon and Dumseny complete the Top 5, with Jock Goodyer, Jessie Attard, David Murcott, Steven Caruso and Max Vidau rounding out the official finishers.

A strong field of Wingless Sprints were also on the program for their final hit-out before their upcoming South Australian and Australian Championships in February.

A Street Stocks Invitational was the final event of the program, with Craig Buchanan finishing ahead of Carey Weston and Dylan Wilkinson.

Our next meeting will be the South Australian Wingless Sprints Title to be held over 2 nights on February 19th and 20th, with the Australian Wingless Sprints Championship to be held the following weekend, also over 2 nights on February 26th & 27th (support divisions for both events will be announced once they have been confirmed). All tickets will again be available online only due to ongoing Covid-19 Restrictions via www.speedwaytickets.com.au