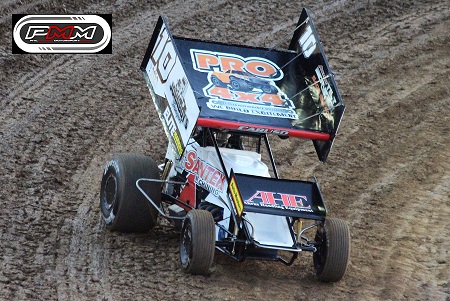 After a gruelling Sprintcars SA Speedweek, that saw events at Whyalla, Mount Gambier and Bordertown, the Final Round at the Murray Machining and Sheds Murray Bridge Speedway on Saturday night unfortunately saw only 9 cars front for action. Due to the low car count the format was changed at the pre-event Drivers Meeting with Track Management deciding to run two heats followed by twin 20-lap features.

Time Trials were also dropped therefore the heat line-up for the opening was decided with a pill draw with a complete invert for heat 2. The opening heat saw Daniel Pestka, who was only previous round winner in the field having won round 3 at Bordertown, utilising his pole start to win heat 1 ahead of Lisa Walker and Steven Caruso. The invert placed Mark Caruso on the front row of heat 2 and he raced away to win with Daniel Pestka and Steven Caruso following.

Therefore, Pestka would start on the front row of the opening 20 lap final with Mark Caruso, Steven Caruso, Lisa Walker, Max Vidau and Austin McDonald completing the first three rows. With the track conditions being extremely fast there was little passing as the race went flag to flag with Pestka setting a new track record, erasing the 18-year-old mark set by Darryl Downing. The time of 4:02.838 was almost 19 seconds faster than the time that was set on October 19, 2002.

Steven Caruso, Mark Caruso, Walker, Vidau and McDonald were the only other finishers.

Feature #2 would only see five cars complete the journey after Pestka spun in turn two on lap 2 and he was collected by McDonald and Mike Fox. Following the restart, the remaining 19 laps ran without caution as Steven Caruso defeated Adrian Cottrell, who led the race early before being passed in turn two, Mark Caruso, Max Vidau and Lisa Walker.