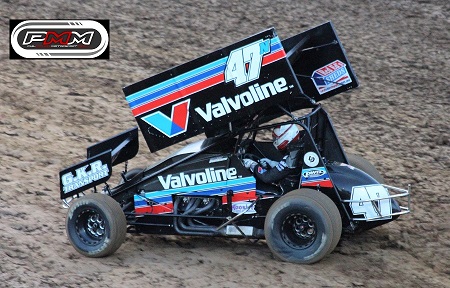 Marcus Dumesny won the season opener in the Rowett Motorsport #47 (Phil Michell Photo)
The South Australian Speedway season burst into life on Saturday night for the first time since the COVID enforced break with over 100 competitors in the Murray Machining and Sheds Murray Bridge Speedway pit area. The event featured eight racing categories with the main events being the 410ci Sprintcars and the Des James Memorial for V6 Sprints.

After claiming last season’s USC SA Title without an A-Main victory Marcus Dumesny finally added a Murray Machining and Sheds Murray Bridge Speedway win to his growing resume as he won the Sprintcars SA season opener. Dumesny started from position four and he quickly made his way up into the runner-up position shadowing early race leader Ryan Jones before Jones hooked a rut in turn two allowing Dumesny to make the race winning pass just past the halfway mark.

Jones, who started from the pole, hung onto second in the 30-lap finale with Matt Egel charging on the high side late in the race to secure the final podium position. Steve Caruso had an impressive night as he finished fourth while Brad Keller completed the top five in his return to Sprintcar racing. After starting on the outside of the front row Jessie Attard faded to finish sixth, in a car that constantly had the front wheels in the air, while Mark Caruso, Lisa Walker, Daniel Pestka, who was making his debut for the Stark Racing Team, and Joel Heinrich completed the top 10.

The A-Main got off to a dramatic start with Glen Sutherland, who had qualified in eighth, requiring a second push after his top wing tree collapsed ruining what had been a solid night in his brand new #20 Maxim.

During the race, the red light would come on twice, first for Adrian Cottrell who lost the right rear tyre in turn 1 and later for Lachlan McDonough who rolled in turn 2.

Earlier in the night the heat winners were Ryan Jones, who passed Lisa Walker on the final lap, Steven Caruso, Jessie Attard and Brad Keller.

The Des James V6 Sprint Memorial was dominated by Nick Hall as he led the non-stop 20 lap final after winning both heat races. Second place went to veteran Michael Buxallen with Kym Simon completing the podium. The top three were the only drivers to complete all 20 laps with the rest of the field at least 1 lap behind. Renee Pfeiler was constant all night as she finished fourth with Toby McCarthy completing the top 5.

The Wingless Sprints were out in force with a strong field that included six rookies. Despite a strong line-up the feature event proved to be a driving demonstration by Jack McCarthy who won by over 5 seconds ahead of Kirby Hillyer, Anthony Tapley, Mitch Broome, and Darryl Sloan. Ben Cartwright was the best of the rookies in sixth, while Tyson Martin, Mick Barker, Brent Fox, and Nicole Southby completed the top 10.

Paul Blenkiron was too good in the depleted Super Sedan feature with Kym Leyson and Steve Schwartz completing the top three. After winning the opening heat Ryan Alexander was a non-starter after breaking the tail shaft in heat 2.

The Late Model feature went the way of Mark McCarthy, who set a new 15 lap track record, followed by Andy Maxwell Jr and Mat Crimmins while Sam Brumfield edged out Nigel Reichstein in the Street Stocks. Nathan Thorne was third ahead of a fast finishing Tony Prideaux.

The Junior Sedan feature saw 15 drivers take to the track for the 12-lap finale with Aaron Tranter declared the winner after Drew Flatman was put back two spots after contact with Tranter as they battled for the lead. Chelsea Gwynne therefore was elevated to second with Flatman, Ky McEwin and Lachlan Brown completing the top five.

Racing will return to the Murray Machining and Sheds Murray Bridge Speedway on November 7.