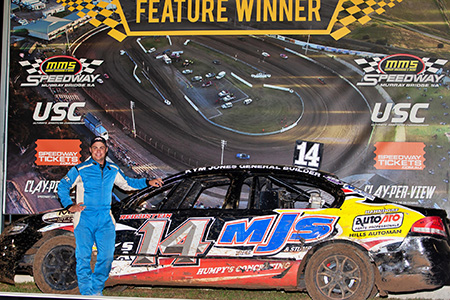 The final round of the MJS Street Stock Series at the Murray Machining and Sheds Speedway at Murray Bridge last Saturday night was dominated by Nigel Reichstein as he led all 30 laps in the finale. The feature race saw 15 laps contested in both directions but the mid race change didn’t phase the veteran racer as he held out Sam Brumfield, who held down the runner-up for the entre distance, and Mount Gambier’s Jayden Edwards, who fell to as low as fifth before clawing his way onto the podium.

Riverland based racer Neville Nitschke returned to the Street Stock division after piloting a Super Sedan a fortnight earlier, to claim fourth while Craig Buchanan, Phil Watson, Aaron Tyler, Haydon Jolly, Jason Gantz and Andrew Hardacre completed the top 10. Ryan Buchanan and Moss Buchanan were the only other finishers of the original 17 starters.

The big surprise was both Bailey and Rhys Heinrich, who finished first and second at the previous round at Mount Gambier, ended their nights on the infield.

In addition to the Street Stocks the meeting also saw Speedcars, V6 Sprints, AMCA Nationals and Junior Sedans on track.

In the Speedcar Blackjack Series Round it was Todd Wigzell in the Darryl Knuckey owned #88 who defeated New South Welshman Paul Murphy and local resident Robert Heard. Wigzell also won the opening heat while Robert Heard was victorious in heat 2.

Former South Australian Champion Nick Hall dominated the 15 lap V6 Sprint feature winning by over 4 seconds ahead of Chris Quinton and Damien Eve. Kym Simon was the next best with Renee Pfeiler, Darryl Barkla and Glen Bousfield rounding out the finishers.

Finally, a small field of Junior Sedans were on hand as a late addition to the program with Kirra Lee Pitcher making a clean sweep of the evening. Caitlyn Gilding was the runner-up in the 12-lap finale ahead of Lachlan Brown and Brock Cadd.