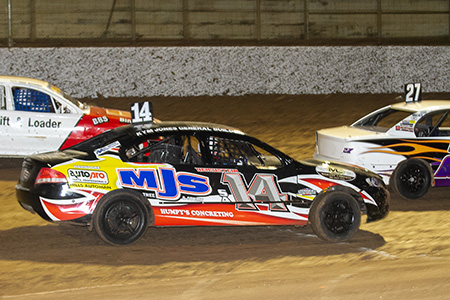 The mammoth month of March racing at the Murray Machining and Sheds Speedway at Murray Bridge continues this Saturday night (March 14) with the Grand Final of the MJS Street Stock Series. After a big weekend of racing last weekend at Mount Gambier the State’s leading Street Stock drivers return to Murray Bridge as they attempt to gain maximum points in the final round of the tough five round state-wide campaign.

After their stunning 1-2 finish last weekend Bailey and Rhys Heinrich will enter the series finale full of confidence and they will be hard to stop in the unique 30 lap A-Main, that is run in both directions with a mid-race caution.

Track Champion Nigel Reichstein is always fast at Murray Bridge while Mount Gambier’s Jayden Edwards, who was second in the round at Whyalla earlier this year is always fast and can never be discounted. Young charger Nathan Thorne, Cade Cox and Jason Gantz will also be out the end the series on a high on what should be an intense night of sedan racing.

The format will see three rounds of heats prior to the all-important 30 lap A-Main.

Following their State Championship in late February the V8 AMCA Nationals return to the 360-metre venue with newly crowned State Champion Jake Armstrong leading the charge. Jason Robinson was a welcomed edition to the field a fortnight ago after sitting out the early part of the season and he is sure to give Armstrong a real hurry up. Kelsey Allen John Stumann, Alan Saint and Victorian Frank Thierry will also challenge for the win throughout the evening.

For the open wheeled fans both the Speedcars and V6 Sprints will also be on the program.

Victorian Nick Parker will head to Murray Bridge on the back of dual feature race victories at the Simpson Speedway last weekend and he will be hoping to continue his impressive form. Local hero’s Robert Heard, and Brett Ireland will fly the flag for South Australia along with Todd Wigzell. New South Welshman Paul Murphy will return to the driver’s seat of the Alison Dwyer / Mark Harrington owned #6 following the third placed run by New Zealander Caleb Currie at the recent Australian Speedcar Championship at Warrnambool.

In the V6 Sprints former South Australian Champions Nick Hall and Chris James will be hard to beat but veteran Damian Eve has shown some great speed at the recent events at Whyalla and Waikerie but simply hasn’t had the luck to finish out front. With a good run don’t be surprised to see the immaculate #5 at the pointy end of the field.

Junior Sedans have also been added to the program with nominations still being taken.