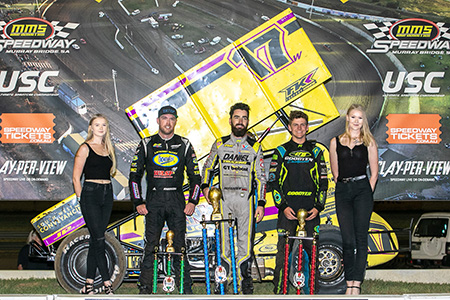 James McFadden has taken out the Rural City of Murray Bridge 60 4 60 at Murray Bridge Speedway after taking the lead in the second half of the race.

After starting from the front row, Jamie Veal looked the goods early on, before his rear tyre exploded - but, conveniently within the 30-lap half-way mark window, thus bringing the race to it's compulsory pit-stop.

Veal, along with Robbie Farr and Brock Hallett all opted to change their tyres sending them to the rear of the field.

This left Marcus Dumesny in the lead, who was desperately trying to nurse his car home with a deflating inner front tyre, but opened the window for McFadden to take control of the race and secure the 60-Lap finale.

Jock Goodyer was impressive in finishing second, with Grant Anderson is his first drive for the Downing Brothers Race Team in third.

Veal stormed from the back of the pack to finish in fourth, with Farr in fifth and Dumesny fading to sixth.

Will Carroll led home an all Victorian Top-6 in the Formula 500s 65 Roses Race on Sunday night.

After securing pole position in the Gold Shootout, Caroll was challenged by Ash Sinclair and Angus Hollis in the latter parts of the race, with Hollis unfortunately spinning and giving up his likely podium finish.

This gave Caroll the breathing room he needed to eventually cross the line in what was an eventful 30 lap feature, seeing 11 non finishers on the in-field.

Jordan Rae claimed 2nd with Sinclair in for third.