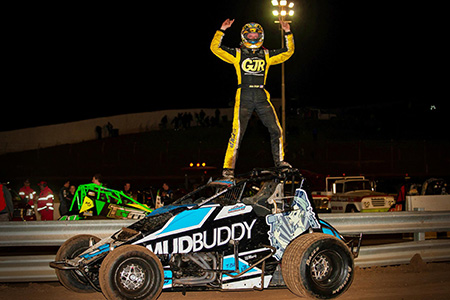 Well we've had two hectic nights so far in The Rural City of Murray Bridge 60 for 60 weekend at Murray Machining & Sheds Murray Bridge Speedway and we've still got the big one to go for Ultimate Sprintcars tonight!

American Alex Bright was systematic and smooth to score the marathon 60-lapper guesting in the Brett Ireland #71 entry to score victory over Alex Ross in second place and early leader Luke Storer in third.

The hectic main event was a credit to all teams who made the starting line-up with a relatively incident free affair after an epic 18 heat, two preliminary A-Mains, a C-Main and two B-Mains over the two nights for the 61 car field.

Official results for the Wingless Sprint Super Series A-Main were:

On a bullet fast track Robbie Farr was able to narrowly account for Jamie Veal in second place and Matt Dumesny rounding out the podium in the 30-lap Ross Wright Memorial main event.

Farr sped the ECP Racing #7 to victory after effecting the pass on early leader Brock Hallett who would later get caught up in an accident with a lapped car on the main straight and end up retiring from the event.

James McFadden suffered a driveline failure in his final heat race and the Monte Motorsport team were unfortunately unable to change the rear end in time to make the A-Main.

The recently crowned WSS champion will no doubt make a huge impact on the event tonight.