MCFADDEN ON TRACK FOR THE 60 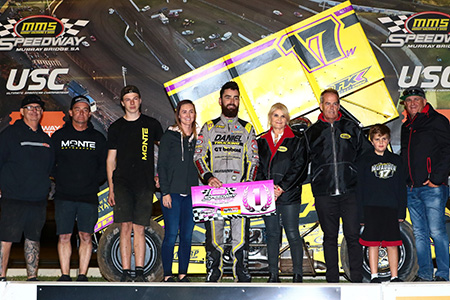 James McFadden may well be in the best form of his life.

He was a smooth and unstoppable force at the Australian Championship at Latrobe in Tasmania but an unfortunate situation with leader Shaun Dobson crashing out in front of him took McFadden’s chance at creating history for Luch Monte along with it.

In between the Australian title and the WSS resumption he jetted to the USA to be back with his KKR team-mate Brad Sweet where the pair pulled off a unique 1-2 for Kasey Kahne.

Returning to Australia he wrapped up the WSS title and then the week after ran down Brooke Tatnell to take the lead and the $10,000 winner’s cheque at the Krikke Boys Shootout.

“He doesn’t take many risks anymore,” says Monte Motorsport crew chief Kim Buswell, “he measures the moves and he’s looking at the last lap not the fast lap. He’s smoother than I’ve ever seen him. The combination of racing here and for Kasey in the states is really having an effect on him. It’s beautiful to watch and to work with.”

With a handful of shows left in Australia before returning to the USA for KKR McFadden is hot property on both sides of the globe.

Can McFadden’s voracious appetite for blue-ribbon main event wins continue in the ’60 for 60’ at Murray Bridge?

Only a brave man would bet against this bullet with a beard.

Photo: James McFadden on the winner’s podium earlier in the season at Ultimate Pink Night at Murray Bridge Speedway (by Savage Shots Photography).