Big Wins For Pascoe, Hancey and Armstrong at MMS 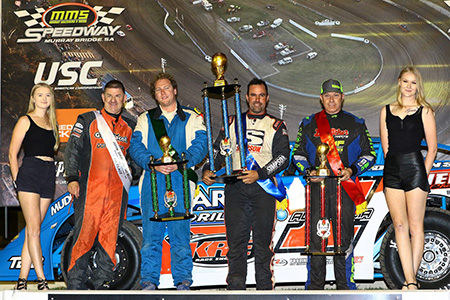 The 13th meeting of the 2019/20 Murray Machining and Sheds Speedway season on February 29 saw a big program of events that included three feature categories with the South Australian Championships for the AMCA Nationals and Modlites and the John Dawson Super Sedan Memorial.

After the 30 lap finales were conducted to decide the State Champions it was local Jake Armstrong who walked away as the AMCA Champion while Queenslander Klinton Hancey successfully defended his Modlite Crown.

The Super Sedan finale, that was run over 35 laps, was by far the race of the night as Australian Champion Matty Pascoe got the better of a classy field to claim the win after trailing Dave Gartner for a majority of the event.

Following his win in the top 6 Dash, Dave Gartner elected to start the 35 lap John Dawson Memorial feature on the outside of the front row and his plan appeared to be the correct one as he quickly jumped into the lead on a track that running the cushion was clearly the preferred line. With the track locked down on the top groove Gartner led the opening 15 laps with Ryan Alexander and Matty Pascoe following in hot pursuit until an electrical issue shut down Alexander’s #47 ending his race.

This elevated Pascoe to second with the positions up front changing 9 laps later as Pascoe executed a monster slider in turn two to take over the lead. As the track began to change the bottom groove came into play late with spectacular racing all over the 360 metre venue. The final stages of the race saw a late charge from Darren Kane as he stormed from fifth to second in what was a stunning performance. Unfortunately Gartner would fade to fourth as he was beaten to the line by Callum Harper.

A total of 19 Modlites fronted for the South Australian Championship with a strong contingent of Queenslanders travelling to Murray Bridge and following the heats they appeared to the class of the field but they were almost upstaged by local Scott Webb. Klinton Hancey led the opening lap of the final after starting from the pole but Webb took the lead on lap two and held the lead convincing until 1 small mistake in the lapped traffic handed the lead back to Hancey on lap 27.

The AMCA final turned out to be a dominate performance by Jake Armstrong who led all but the opening lap to claim the biggest win of his Speedway career. Second place went to New South Welshman Shane Cartwright with former Australian Champion Ryan Alexander completing the podium. Victorian Champion Tim Reidy was next across the line with the defending State Champion Darren McCarthy having to settle for fifth. Jason Robinson made a solid return to the class in sixth with Tasmanian Ellis Dickenson, Victorian Frank Thierry, Dean Heseltine, John Stumann and Shannon Hilder completing the finishers.

Round 6 of the State Series for the Formula 500’s saw Brad Stell take an easy win over Corey Jones, Brendan Zadow, Michael Wise and Nathan O’Shae while Drew Flatman was the winner of the Junior Sedans. Chelsea Gwynne and Kirra Lee Pitcher completed the Junior Sedan podium.

The next event on the Murray Machining and Sheds Speedway season schedule begins this Friday night and will conclude on Sunday Night with the running of the Sprintcar 60 4 60, the Wingless Sprint Super Series 60 Lapper and the 65 Roses Formula 500 Feature.