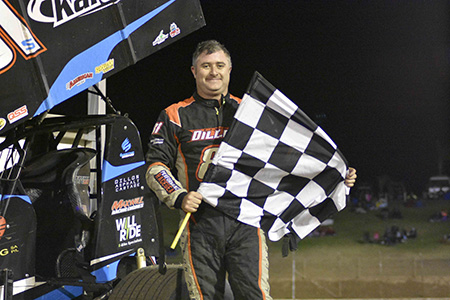 Luke Dillon won the 2020 Sprintcar overall (Photo by Local Sprintcar Photography)
The Murray Machining and Sheds Speedway at Murray Bridge conducted a meeting with a slight difference to open 2020 with a 20/20 racing format for both the Sprintcars and Wingless Sprints with Luke Dillon and Jake Ashworth claiming the overall victories in their classes.

With no heat races to set the starting grids the order for each of the 20 lap feature races was determined by a marble draw with a complete invert for the second race.

Dillon emerged victorious in the overall Sprintcar event by 18 points courtesy of a runner-up result in feature 1 before sliding past Steven Caruso on the final lap to claim feature 2. Californian Kalib Henry, who was driving the Scott Perrett owned #4, finished the night second ahead of Brendan Quinn. Both Henry and Quinn finished the night tied on points, but the tie breaker handed Henry second. In what was a major surprise Michael Lovegrove was fourth ahead of Daniel Pestka, Steven Caruso, Keke Falland, Lachlan McDonough, Ben Morris and Matt Egel.

Matt Egel won the first race after drawing a front row start but his second race only lasted two laps before hitting the wall and damaging the Jacobs Ladder.

After finishing third earlier Lisa Walker rolled in turn four in the second race therefore ending any chance she had of a competitive overall result.

The Wingless Sprints followed a similar format with the result being a lot closer with Jake Ashworth edging out New South Wales visitor Jason Bates by 2 points with Joel Heinrich and Mark Taylor a further 6 points back. With tie breaker being the fastest lap from the opening feature race Heinrich was credited with third place overall.

Both Ashworth and Bates shared the 20 lap features with the deciding factor being a fourth placed result for Ashworth in feature 2 while Bates was fifth in feature 1.

For the second week in a row the V6 Sprints held one of their major races of the season with the running of the Des James Memorial with Nick Hall backing up his win in the Zeke Agars Classic on Boxing Day. Second across the line in the 20-lap final was Chris James, who led the race early, while Steve Agars, who confirmed that this would be his last season rounding out the podium. The field was completed by Jake Oxford, Renee Pfeiler, Damien Eve and Kym Simon.

In the supporting events Mildura youngster Carter Metcalfe hugged in pole line for the entire 12 lap journey to edge out Nate Trewin and Lachlan Brown in the Junior Sedan feature while Nathan Thorne defeated Nigel Reichstein and Craig Buchanan in the Street Stock finale. Robert Kemp out duelled a field of 20 competitors and crashed his way to the win in the U-Pull-It Demolition Derby.

The Murray Machining and Sheds Speedway will now take a break with the next event on the season calendar being held on February 8 when the Ultimate Speedway Challenge returns featuring the Ultimate Sprintcar Championship SA, Late Models and Speedcars.