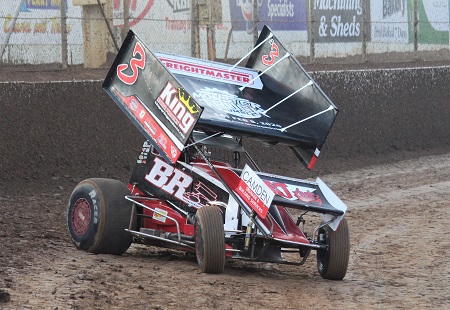 Ben Morris will be in action on Saturday night in the 20/20 (Phil Michell Photo)
This Saturday Night the Murray Machining and Sheds Speedway at Murray Bridge will celebrate the new year with the return of the Sprintcars, with a unique 20/20 racing format that is sure to test the drivers and provide great entertainment for the fans. The night will see the Sprintcar drivers contest two all in 20 lap feature races with the overall winner being decided on a points system in The Murray Valley Standard sponsored event.

Currently the Sprintcar entry list comprises 16 drivers including 20-year-old Californian Kalib Henry, who will team up with Trevor Green and Scott Perrett to pilot the iconic #4. In addition to the young American the line-up also includes Matt Egel and Luke Dillon, both of whom have a Murray Bridge 410ci feature win this season. Then throw in Mark and Steven Caruso, Jake Tranter, Brendan Quinn. Lisa Walker, Keke Falland and Daniel Pestka and the dual feature races should provide some great action and predicting a winner is extremely tough.

The opening feature race line-up will be determined by a marble draw with a complete reversal for the second race. The night will feature Hot Laps at 6:50pm with the races being held at approximately 7:30 and 9:20pm.

The Wingless Sprints will also race to the same 20/20 format with a field of 20 drivers nominated including Joel Heinrich, Matthew Kennedy, Jake Ashworth, Anthony Tapley and Cory Hodgson. Joining the locals will be Jason Bates from New South Wales and he will be heading to Murray Bridge in great form as he is regular front runner at the Valvoline Raceway.

For the second week in row the V6 Sprints will contest a blue-ribbon event with the Des James Memorial on the line. Nick Hall will going for back to back wins having claimed the Zeke Agars Classic, but he will be kept honest by Damian Eve, Jake Oxford, Chris James and John McKenzie.

A good field of Junior Sedans and Street Stocks will round out the racing program while the night will be capped off by the U-Pull-It Demolition Derby with over 20 nominations.