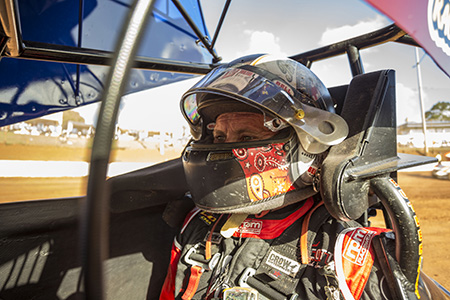 The Rural City of Murray Bridge will proudly present the opening round of the 2019/20 QSS World Series Sprintcars championship this Thursday and Friday night at the Murray Machining and Sheds Speedway. Currently the nomination list stands at 35 with drivers from all Australian states along with two highly talented American’s. Regular Murray Bridge visitor Cory Eliason from California and Pennsylvanian Lucas Wolfe, who will make is MMS debut headline the field that also includes Australian superstars Kerry Madsen, James McFadden, Brooke Tatnell, David Murcott and current WSS Champion Steven Lines.

With the likes of Madsen, McFadden, Wolfe, Murcott and Tatnell in the contracted driver line-up for the entire schedule the 10-driver list is one of the strongest in recent years. The entire contracted list is rounded out by Lachlan McHugh, Glen Sutherland, newly crowned Australian Formula 500 Champion Jock Goodyer, Jason Pryde and exciting Victorian Rusty Hickmann.

Once again Steven Lines hasn’t committed to the series, but he is expected to compete a majority of the 2019/20 series. Not only is Lines the defending series Champion, but he is also the defending race champion having won the corresponding round 12 months ago ahead of Kerry Madsen and Cory Eliason.

Joining the drivers mentioned will be a strong local contingent including Matt Egel and Luke Dillon, both of whom have won a WSS round at the “Bridge”, Daniel Pestka, Brock Hallett, Brendan Quinn, Jake Tranter, Steven and Mark Caruso, Craig Vanderstelt and Aidan Hall.

The two night event will also feature the locally based V6 Sprints on December 26 as they contest one of their biggest blue ribbon races of the season with the running of the 2019 Zeke Agars Classic, an event that honors the inaugural winner of the Grand Annual Sprintcar Classic, while night 2 will be supported by a strong field of Modlites.

Following the 2-Night WSS round the Sprintcars will return to the Murray Machining and Sheds Speedway on January 4, 2020 with a unique 20/20 Format along with a U-Pull-It Demolition Derby.