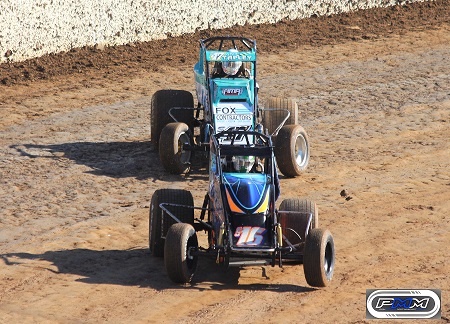 Meeting #8 of the 2019/20 Murray Machining and Sheds Speedway season took place last Saturday night with an all sections Sportsman Meeting with the main events being round 3 of the State Wingless Sprint Series and the thundering Super Sedans with Joel Heinrich and Kym Jury being the big winners on the night.

26 Wingless Sprints provided some great racing throughout the night with five different heat winners with Jake Ashworth, Cory Hodgson, Daniel Storer and Jeremy Pearson with one each while Joel Heinrich recorded two wins, both from the back of the field.

In the 25-lap finale Heinrich continued his winning form as he dominated the final leading from start to finish ahead of Daniel Storer and Jake Ashworth. Throughout the final Heinrich was faultless only giving Storer one opportunity to close as they negotiated lapped traffic with eight laps remaining. Heinrich’s victory was his second-round win of the series; therefore, he is unbeaten in the State Series having missed round 2.

Fourth across the line was Cody Atkins with Jack McCarthy, who stormed through the field having transferred via the B-Main completing the top 5. The top was 10 was rounded out by Cory Hodgson, Brett Ireland, Mark Taylor, Anthony McMillan and Michael Ross.

The Super Sedans started the night with nine cars but the time the feature rolled around only five cars were left with Kym Jury leading the shorted race from start to finish after making a great start from the second row. Michael Miller claimed the runner-up spot ahead of Kym Hammerstein, Paul Blenkiron and Kym Leyson.

In the Street Stocks it was a return to the status quo with Carey Weston winning again after being knocked off the top step at his last appearance. Weston’s win was his fourth in five Murray Bridge starts this season.

Nigel Reichstein was the best of the rest ahead of Craig Buchanan, Jason Gibbs, Cade Cox, Matt Maynard, Keenan Richards, Anthony Buchanan, Moss Buchanan and Andrew Hardacre all inside the top 10.

A small field of 360ci Sprintcars were on hand with Jarman Dalitz defeating rookies Brent Fox and Clinton Warner. Despite the small field the feature race was still full of drama with Ben Gartner rolling hard in turn three after pulling a monster wheel stand and then flipping. Dan Evans failed to turn a lap all night in the Shaun McClure owned #8.

Aaron Tranter won his second Junior Sedan feature of the season defeating Callum Crossing and the new look Nate Trewin while Jake Armstrong made it back to back wins as won by over four seconds. South Australian Champion Darren McCarthy was next with John Stumann in third.

The next event at the Murray Machining and Sheds Murray Bridge Speedway will be on December 26 & 27 with the opening round of QSS World Series Sprintcars featuring Americans Lucas Wolfe and Cory Eliason along with the contracted stars including Kerry Madsen, James McFadden, Brooke Tatnell, David Murcott, Rusty Hickman and Lachlan McHugh.