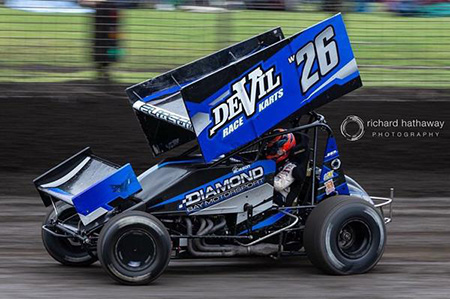 Livewire Californian Sprintcar driver Cory Eliason is set to appear at several dates between Murray Machining & Sheds Murray Bridge Speedway and sister track Valvoline Raceway between December 26 and January 11 during WSS at ’the Bridge' and the Ultimate Sydney Speedweek at Valvoline Raceway this summer, taking the American count to five and Californians to two in Sydney.

It also adds the interesting stat that two of the top three All Stars (with winner Aaron Reutzel) will now be in Sydney.

He’ll also join Pennsylvanian Lucas Wolfe as the two Americans face off against the Aussies in the first two rounds of World Series Sprintcars at Murray Machining & Sheds Murray Bridge Speedway on December 26 and 27th.

Eliason is fresh off a schedule that included the Ollie’s Bargain Outlets All Star Circuit of Champions and selected World of Outlaws NOS Energy Sprintcars Championship dates with the super professional Rudeen Racing.

He scored “Rookie of the Year” honours with third in the series, along the way picking up two main event wins.

He was only outside the top ten on ten occasions – racking up fourteen ‘top fives’ and thirty ‘top tens’ from the forty main events of the series.

The Visalia (CA) based 28-year-old hard charger is excited to return to Australia to race once again with the Steve and Paul Stathy Diamond Bay Motorsport Devil Karts #26.

His addition to the ranks for the Speedweek series is another wild card entry to a field bursting with interstate and international talent.

The wise-cracking throttle stomper is already locked in for a big USA campaign in 2020 with All Stars, World of Outlaws and even midget dates on the horizon with the sparking Rudeen team.

For now his eyes are on Australia with Murray Bridge and Sydney in particular.

We can’t wait to have the Diamond Bay #26 shining in our pits!