A Pre-Christmas Cracker at Murray Bridge 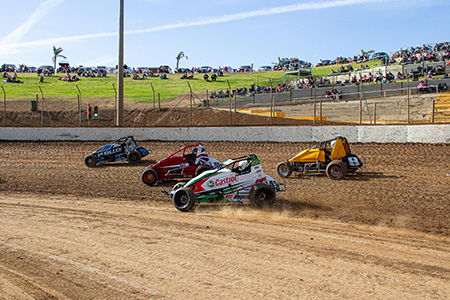 The final pre-Christmas meeting of the year will take the green this Saturday night at the Murray Machining and Sheds Speedway at Murray Bridge with a Sportmans Night with six racing categories on the program. The main feature of the night will be round 3 of the Wingless Sprint State Series with 24 nominations including the likes of last weekend’s winner and current South Australian Champion Daniel Storer, opening round winner Joel Heinrich, Anthony Tapley, Jake Ashworth, Keke Falland and Jack McCarthy.

Joining the Wingless Sprints on the all section program will be a healthy field of 10 Super Sedans, close to 20 Street Stocks and competitive fields of 360ci Sprintcars, Junior Sedans and AMCA Nationals.

The Super Sedan field all be chasing local racer Paul Blenkiron who has captured 2 feature race victories this season at Murray Bridge along with a third at the Tolmer Speedway. After making his return to Super Sedan competition last start Michael Miller will be out to go one place better this Saturday night. Steve Schwartz, Mick Brougham, Michael Brown and Kym Jury will also be drivers to watch in what should be a great contest.

A small field of 360ci Sprintcars will be on hand with a Sprintcars SA Club Show being added following two extremely entertaining shows already this season. The small field includes opening night winner Steven Caruso, dual South Australian Champion Dan Evans, Jarman Dalitz, Ben Gartner and rookies Brent Fox and Clinton Warner all taking the opportunity to get some laps in before their next appearance in January.

The biggest Junior Sedan field of season is set to sign in at the pit box with 13vdrivers set to kick start their Christmas holidays off in style. Last start winner Kira Lee Pitcher will have to race hard to fend off the likes of Aaron Tranter, Nate Trewin, Callum Crossing and Lucas Warnett.

Finally a field of seven AMCA Nationals will take to the track with back-to back feature winner Jake Armstrong the warm favourite to make it three win in a row but former Australian Champion Ryan Alexander and current State Champ Darren McCarthy will make it extremely hard for the driver of the #14. John Stumann has also been a consistent performer this year and can’t be discounted.