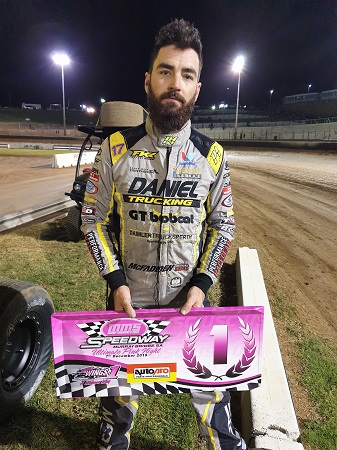 James McFadden drove his Monte Motorsports #17 Maxim into victory lane last night at the Murray Machining and Sheds Speedway at Murray Bridge to claim his second career USC SA feature win. On what was the Ultimate Pink Night – Presented by Autopro Murray Bridge, McFadden sat back and ran fourth for the opening stanza of the race and slowly moved his way to the front taking the top spot with four laps remaining.

“I was quite happy to sit back in fourth and ride around and learn a few things, but things started to go our way I was able to captilise on a few mistakes and I got the win. It was a shame what happened to Marcus (Dumesny) as he clearly the class of the field tonight” commented McFadden on the podium as he celebrated with his team and his Car Owner Luch Monte.

Defending series champion Robbie Farr finished second with Matt Egel getting the better of Ryan Jones in what was a torrid battle for the final position within the top three. Fifth place went to Marcus Dumesny in the Rowett Motorsports Maxim, but it could have been a whole lot better after leading the opening 23 laps comfortably until getting involved in an accident with the lapped cars of Aidan Hall and Glen Sutherland. With Dumesny stopping after the contact he was sent to rear of the lead lap cars.

With Dumesny’s demise Farr was elevated to the race lead but it was short lived as he only held the lead for another four laps before McFadden pounced. The Monte Motorsports pilot then had to survive a green, white, chequered finish after rookie Daniel Smith crashed hard in turn three with McFadden in sight of the pink and white chequered flag.

Craig Vanderstelt had an impressive evening as he finished sixth with Jake Tranter, Lisa Walker, Steven Caruso and Daniel Pestka completing to top 10.

Earlier the heat winners Farr (2), Dumesny and Jones while Dumesny and Farr topped their respective flights in qualifying.

The night also saw action from the Wingless Sprints, Modlites and Late Models with some competitive racing throughout to entertain the large crowd on hand.

The Wingless Sprints will be at Murray Bridge next Saturday night with Round 3 of the South Australian State Series.

One of the biggest fields in recent years fronted for the Modlite club show with Michael Cowland winning by close to 3 seconds over Patrick Hewitt and Scott Webb with Rookie Anthony Grillett and Justin Chadwick rounding out the top 5.

Andy Maxwell Jr continued his recent run of form with victory in the Late Model feature.

The next event at the Murray Machining and Sheds Speedway will be this Saturday night (December 14) with an all sections Sportmans Night featuring Round 3 of the State Wingless Sprint Series, 360ci Sprintcars, AMCA Nationals, Super Sedans, Street Stocks and Junior Sedans.