MCFADDEN HEADED TO THE BRIDGE FOR ULTIMATE PINK NIGHT! 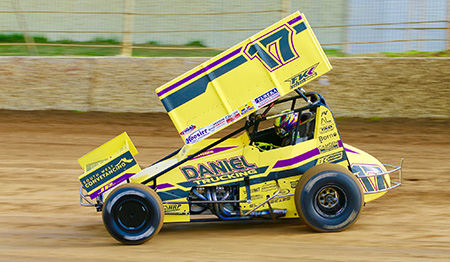 He’s one of the most explosive Sprintcar drivers not only in the country but these days on the planet as well.

Fresh off a win at the SRA round at Borderline Speedway Mount Gambier two weeks ago dual Australian and WSS Champion James McFadden is on his way to Murray Machining & Sheds Murray Bridge Speedway for this Saturday night’s Ultimate Pink Night.

And he’s going to be fast.

Using the opportunity to get some track time in ahead of the Boxing Day World Series Sprintcars two-night bonanza at “MMSS” McFadden will continue testing and learning about his innovative Daniel Trucking / GT Bobcat / Southwest Conveyancing Maxim.

“This is quite a different car and we’re finding out some really cool things we can do with it every time, we hit the track,” says long serving Monte Motorsport crew chief Kim Buswell.

After spending most of the American summer in 2019 racing for the famed Kasey Kahne Racing operation and scoring more than his share of victories in the process McFadden is back home in Australia in arguably his best form ever.

“I said to him after Borderline that I’ve never seen him drive better,” Buswell explains, “he’s just so sharp this year. Obviously, that comes from racing with one of the world’s best teams and racing against the best teams in the world every night but there’s just a sharpness to his driving this time. I can’t wait to get started with World Series and the big races over summer.”

McFadden’s addition to the Ultimate Pink Night USC SA Round Two, presented by AUTOPRO Murray Bridge, is a huge boost for fans.

Jones will be relishing the chance to run against McFadden and Robbie Farr (who finished third last weekend in Sydney plus all of the SA stars in the second USC SA round of the season.

“James is one of the best guys in Sprintcars these days,” Jones explained in an interview in Sydney over the weekend when he learned of McFadden’s impending visit, “any time you race you
want to race against the best and having him at Murray Bridge means we all have to step it up.”