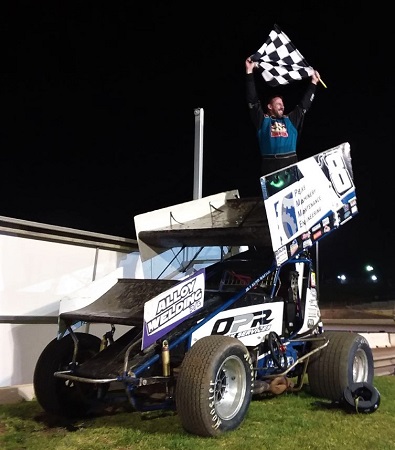 Terry Pitt made a stunning return to Sprintcar competition on Saturday night as he drove to victory in Round 3 of the Mainline Dynolog Dynamometers Allstar Sprintcar Series – Presented By Ridley’s SA at the Murray Machining and Sheds Speedway at Murray Bridge. After sitting out the opening three Sprintcar shows crewing for his Brother Hayden, it was Terry’s turn behind the wheel, and he didn’t disappoint as he claimed his first Sprintcar main event win since February 2014 at Virginia.

Second across the line was current series Champion Mark Caruso with his younger Brother Steven completing the podium. For the Caruso’s it was the second time this season that they had shared the MMS podium this season, having run 1-2 at the opening 360ci Sprintcar show.

After being caught up in an opening lap incident and being sent to back of the field current South Australian Champion Dan Evans charged back to finish fourth with Mount Gambier’s Scott Enderl completing the top five. Local resident Jarman Dalitz, Colin Brooks, former National Champion Tony Moule, Mitch Smith and Paul Soloman rounded out the top 10.

The A-Main saw several dramatic moments that all began in turn four on the opening lap when Michael Tancredi spun in front of the entire field with Dan Evans collecting the spinning car damaging the front wing and coming to a halt. Tancredi would suffer a flat left front tyre but he would continue to eventually finish eleventh.

The biggest incident would however occur with only eight laps remaining and it would end a dominant display by Matt Egel, who was leading by over 7 seconds at the time. As the race leader attempted to lap Ben Gartner, who was running fifth at the time, the two cars made contact sending the #52 hard into the wall in turn three with the car tipping over near the pit gate.

This elevated Pitt into the lead, and he went on to lead the final laps to claim what was a memorable and well overdue win.

Mark Caruso was the fastest driver during the Time-Trials while the heat winners were Mark Caruso, Paul Soloman, Tony Moule and Matt Egel. Egel’s win in heat 4 was the race of the night as he came from the back of the grid and stole the win on the final corner from Scott Enderl winning by a mere 0.092 of a second.

The night also saw the biggest Formula 500 race of the season conducted with the “King of the Bridge” being taken out by Victorian Danny Carroll. Australian Champion Josh Buckingham made a bold move in turn three on Brendan Zadow to secure the runner-up spot with Corey Jones taking advantage of the aggressive move to also get by Zadow to finish third.

After leading for more than half the race Zadow had to settle for fourth with Terry Rankin, Brad Stell, Patrick Merrett, James McDonald, Nathan O’Shae and Ben Cartwright rounding out the top 10 in the 25-lap finale.

Rounding out the open wheeled theme of the night was round 2 of the Blackjack Speedcar Series with Sydney’s Matt Jackson edging out Victorian Nick Parker in what was a great display of Speedcar racing. Todd Wigzell was the best of the locals in third, with Mitch Whiting, Paul Murphy, Glen Shaw and Norm Moore rounding out the finishers.

Heat winner on the night were Parker, Jackson and Whiting. The opening heat of the night saw the demise of Adam Wallis who rode out a big crash in turn 1 after hitting the outside wall.

Paul Blenkiron won his second Murray Bridge feature of the season as he led home Michael Miller and Mick Brougham in the Super Sedan main event while Kirra Lee Pitcher defeated Nate Trewin and Riley McEwin in the Junior Sedans.

The next event at the Murray Machining and Sheds Speedway will be this Saturday night (December 7) with the annual “Pink Night” with the racing program including Round 2 of the Ultimate Sprintcar Championship SA, Late Models, Wingless Sprints, Modlites and Classic Sprintcars.