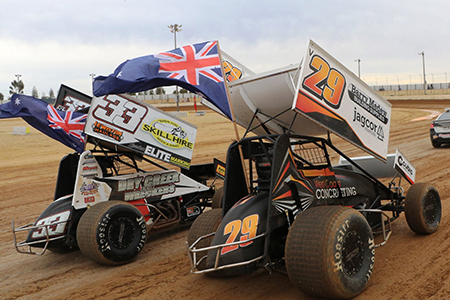 A big open wheeled Speedway event will feature this Saturday night at the Murray Machining and Sheds Speedway at Murray Bridge with Round 3 of the Mainline Dynalog Dynamometers Australian Allstars Sprintcar Series, The Annual King of the Bridge Formula 500 race and Round 2 of the Blackjack Speedcar Series.

The Allstar Sprintcar Series has attracted a field of over 20 cars with previous round winner Michael Tancredi leading the field. Tancredi was also the winner of the corresponding round last season at Murray Bridge and he will be hoping for a repeat this Saturday night.

Joining Tancredi from across the border will be a strong line up including former Australian Champion Tony Moule, who was third in the opening round, Paul Soloman, Geelong’s James Aranyosi, James Wren, Marcus Green, Mitch Smith and rookies Corey Sandow and Steven Loader. Wagga’s Shaun Forrell will also make the trek to Murray Bridge.

But the locals will not want a repeat of last November when they were beaten on home turf and with several regular 410ci drivers in the field including Matt Egel, Steven and Mark Caruso set to take to the track it may prove a tough ask to repeat the performance. Current State Champion Dan Evans, Colin Brooks, Jamie Hendry, Terry Pitt, Scott Enderl and Jarman Dalitz are also nominated making it a strong list of South Australian talent.

The Annual King of the Bridge Formula 500 race will also double as Round 4 of the State Series with all the regular runners in this weekend’s field along with the addition of current Australian Champion Josh Buckingham.

In addition to Buckingham the Victorians may prove hard to beat with Terry Rankin, who has also been racing 410ci Sprintcars this season, James McDonald, who has a feature win at MMS this season and Danny Carroll all on the nomination list.

The chances for a home state win will rest on the shoulders of Patrick Merrett, Corey Jones, Brad Stell and Brendan Zadow.

The Formula 500 racing throughout the night is sure to be action packed as each driver chases the chance to wear the crown and the robe at the end of the feature event.

Round 2 of the South Australian Blackjack Speedcar Series will also be on the program rounding out the open wheeled headliners. The field includes a great mix of local talent along with a host of visitors including New South Wales standout Matt Jackson. Fellow New South Welshman Paul Murphy will also be in the field driving the Mark Harington / Alison Dwyer owned #6.

The Victorian entries include Nick Parker, who was the runner-up in the recent Speedway Challenge event, Adan Wallis, Dillon Ghent, Glen Shaw, Mitch Whiting and Chris Nankiville. Todd Wigzell will be leading South Australian hope in the Darryl Knuckey owned #88.

The Super Sedan and AMCA Nationals will see a driver swap as Ryan Alexander will trade in his usual Steve and Wendy Stewart owned Super Sedan ride and revert to the AMCA Nationals for the night in order to gain seat time for the State Title later in the season. With Alexander piloting the #36 AMCA Michael Miller return to the Super Sedan ranks in the #47 for the first time since June at the Sunline Speedway finale at Waikerie.

The Super Sedan field will also see the season debut of Mick Brougham along with the return of regulars Paul Blenkiron, who is coming off a feature win at the Tolmer Speedway at Bordertown, Kym Jury, Kym Hammerstein, Kym Leyson and Steve Schwartz.

Joining Alexander in the AMCA’s will be Victorians Frank Thierry and Zack Tyson and locals Jake Armstrong, John Stumann and Michael Qualmann. Armstrong will start a warm favourite having won the last start at Murray Bridge.

The racing program will be rounded out by the Junior Sedans.