Heinrich Scores Maximum Points In Round 1 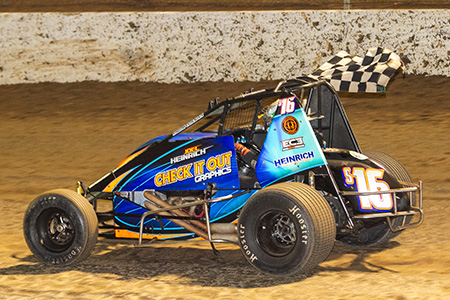 Joel Heinrich celebrated his birthday a day early by winning the opening round of the Wingless Sprint State Series at the Murray Machining and Sheds Speedway at Murray Bridge on Saturday night. After starting from position 8 in the 25-lap final Heinrich made a rapid start moving into second within the opening 10 laps before using the top groove to run down early race leader Jake Ashworth taking the lead with only three laps remaining. With the race running flag to flag Heinrich also entered the record books as he set a new track record of 6:30.753.

Ashworth, who started from position 2, held on to the runner-up spot with Matthew Kennedy, who was making his first start of the season, was impressive as he rounded out the podium. Keke Falland, who was making his first Wingless Sprint start since finishing fourth in the 2015 Australian Title, drove the Roydn Bailey owned #3 to fourth, while Anthony Tapley and pole sitter Renee Pestka completed the top six. Cory Hodgson had a consistent night as he finished seventh while Jack McCarthy, Hayden Vickers and Mark Taylor, who transferred from the B-Main, finished at the back end of the top ten.

With 29 cars signing in for the opening round the competition throughout the night was great to watch with six different heat winners during the preliminaries. The night began with Hayden Vickers taking his first ever heat win While Mick Barker and Cory Hodgson had wins during the first round. Veteran Norm Moore was a surprise winner of heat 4 with Heinrich and Ashworth taking out the final two heats.

On what was a huge night of racing the support program included Super Sedans, Street Stocks, V6 Sprints, Junior Sedan and AMCA Nationals.

For the first time in several season’s the Super Sedan category saw a double figure nomination list for a club show and the field was bolstered by the extremely late nomination of former Australian Champion Callum Harper. Despite only arriving at the track moments before the opening heat race the short preparation didn’t stop him from winning the feature race by almost 10 seconds over Paul Blenkiron, Kym Jury, Kym Leyson and Jason Gantz.

For the second meeting in a row South Australian Champion Ryan Alexander failed to finish the A-Main after suffering a flat right rear tyre while holding a commanding lead.

In the Street Stocks Carey Weston’s attempt to win four feature races in a row came up one spot short as he was defeated by Bailey Heinrich in what proved to be a marathon feature event due to a number of stoppages. Third went the way of Nigel Reichstein who recorded his third podium result of the season while Craig Buchanan and Nathan Thorne completed the top five.

In the AMCA Nationals Jake Armstrong defeated Michael Miller and Darren McCarthy while Drew Flatman survived a late charge from Aaron Tranter and Kirra Lee Pitcher in the Juniors.

In the final category, the V6 Sprints, Chris James was an easy winner in the 20-lap final over John MacKenzie, pole sitter Kym Simon, Greg Bell and Glen Ince.

The next event on the 2019/20 Murray Machining and Sheds Speedway season schedule is Round 3 of the Hi-Tec Oils Ultimate Speedway Challenge – Presented By Moore Mechanical next Saturday night (November 9). The night will feature the Bill Wigzell Battle of the Bridge – USC SA Round 1 for Sprintcars, along with the Ultimate Challenge for Late Models and Speedcars.