State Series Set To Sizzle At The Bridge 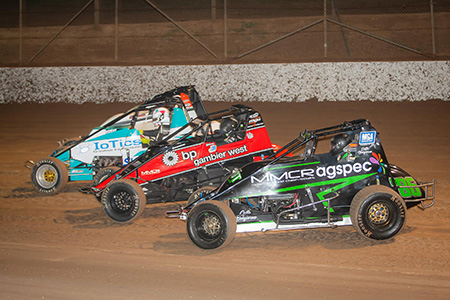 Already this season the Wingless Sprints have produced some outstanding racing and it is sure to continue this Saturday night with the opening round of the Wingless State Series at the Murray Machining and Sheds Murray Bridge Speedway. The opening three club events has seen three different drivers greet the chequered flag and with a field of 30 drivers nominated for this weekend there is a great chance that, yet another competitor could add their name to the 2019/20 season winners list.

When you take a look at the names that will compete in the opening round of the Series the event looks wide open with the likes of feature winners Joel Heinrich and Brett Ireland being joined by Anthony Tapley, Corey Hodgson, Jake Ashworth, Matthew Kennedy, Jack McCarthy and Michael Ross therefore the racing should be intense all night. Also, just for a bit of added spice regular Sprintcar racers Keke Falland and Cody Atkins will join the field making it extremely tough to predict an overall winner.

Each driver will compete in two heat races prior to the last chance qualifier and the 25 lap A-Main.

For the first time this season the V6 Sprints will take to the clay way with a dozen entries which is a welcomed increase in the car count from last season. Former State Champion Nick Hall will start a hot favourite, but versatile racer Damien Eve, Greg Bell, Chris James and Kym Simon will keep him extremely honest.

The Street Stocks have once again nominated in strong numbers, but all eyes will be on Carey Weston and his #17 Ford Falcon as he attempts to claim an unprecedented fourth feature race win in succession. The question is can he be stopped and who can beat the inform veteran?

Junior Sedans and AMCA Nationals will complete the racing program.