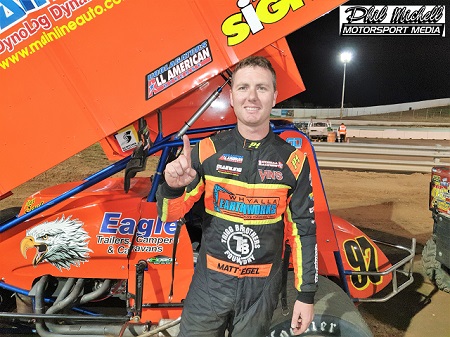 Matt Egel won the opening 410ci Sprintcar Main Event of the South Australian season at MMS (Phil Michell Photo)
Matt Egel sent a message that was a loud and clear to all his South Australian Sprintcar rivals as he dominated the opening round of the Sprintcar Country Tri Series at the Murray Machining and Sheds Speedway at Murray Bridge on Saturday night. After starting from the second row Egel rounded up early race leader Ryan Jones with an exciting outside pass in turn four and then he went on to claim the win in the season opener ahead of pole sitter Luke Dillon and Daniel Pestka.

“When the track is like this it really suits my style and I just love to get out there and run the top. The guys always have a great car setup for when the track goes slick like it was tonight. I don’t think I have ever won first night out so the win tonight will give us great confidence for when the USC starts in a few weeks”, added the excited race winner.

Fourth across the line was an impressive Shannon Barry, who was piloting the Brown Family owned #52 Cool, with Brock Hallett, who had struggled earlier in the night fighting back to record a top five finish.

Earlier in the night the heat winners were Ryan Jones, Daniel Pestka, Shannon Barry and Luke Dillon, with Dillon being the only winner who didn’t start on the front row.

The opening heat of the night saw the only real drama of the night with a multi car pile-up in turn four on the final lap resulting in Glen Sutherland inverting his #20.

In the open wheeled categories local racer Brendan Zadow was victorious in the Formula 500’s ahead of Dean Cottrell and opening round winner James MacDonald while the Wingless Sprint feature fell to another local as Brett Ireland became the third different winner this season as he defeated Anthony Tapley and Jake Ashworth in what was a great race.

In the AMCA Nationals State Champion Darren McCarthy just edged out Jake Armstrong in the 15-lap decider with Michael Miller in third.

The next meeting at the Murray Machining and Sheds Speedway will be on November 2 with a Sportsman Night featuring the opening round of State Wingless Sprint Series, AMCA Nationals, Super Sedans, Street Stocks and Junior Sedans.