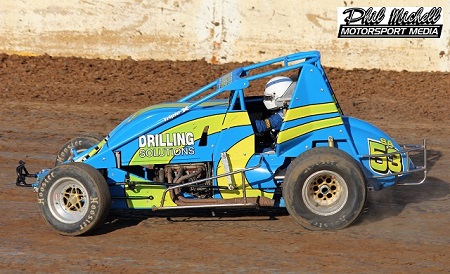 Nicole Southby has been a big improver early in the 2019/20 season (Phil Michell Motorsport Media Photo)
With the opening round of the Sate Series only weeks away the largest line-up of the season so far has entered for this Saturday’s Wingless Sprint Club Show at the Murray Machining and Sheds Murray Bridge Speedway. The list of 20 drivers on paper is the strongest of the season so far and it includes several drivers who will take to the track for the first time this season as they gain some valuable track time prior to the State Series round on November 2, 2019.

Included in the drivers who will be making their first competitive outing of the season are Jake Ashworth, Bronson Mauro, who was a late entry, and Mark Taylor, who was extremely impressive last summer throughout his rookie season.

The on-track action will also see the likes of Joel Heinrich, Cory Hodgson and Anthony Tapley, all of whom have already recorded a podium result this season, battling head to head with Brett Ireland, Darryl Sloan, Ben Harris, Normie Moore and Mick Barker.

In addition to the drivers mentioned a couple of other young pilots to keep an eye on will be teenager Hayden Vickers and Nicole Southby. Vickers is still set to start from the rear of the field as this will only be his third start, but he was outstanding a couple of weeks ago as he finished sixth in the A-Main. As for Southby, the quietly spoken young lady made steady improvements at the back end of last season and she has opened the 2019/20 season with a pair of top 10 results giving her a great deal of confidence in her immaculate #53.