Sprintcar Tri-Series Kicks Off At MMS 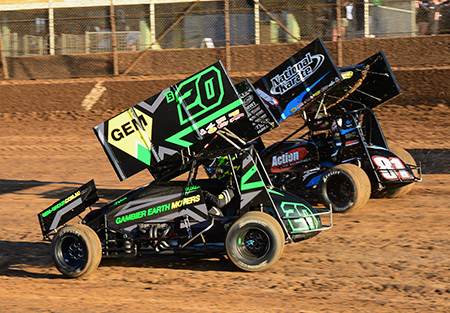 Almost 90 competitors will fill the pit area on Saturday night (October 19) at the Murray Machining and Sheds Murray Bridge Speedway for night number 3 of the 2019/20 season with the headline act being round 1 of the 410ci Sprintcar Country Tri-Series. The field includes 16 of the best local racers who will all be keen to take out the opening 410ci Sprintcar main event of the South Australian season.

Although it the first race of the local schedule several of the drivers have already had recent seat time with the likes of Murray Bridge’s own Ryan Jones, Matt Egel, Daniel Pestka and Glen Sutherland all racing in Darwin during the Chariots of Thunder Series, with both Jones and Egel recording podium results.

The field will also include the top four from the 360ci Club Show that was conducted a fortnight ago with feature winner Steven Caruso, runner-up Mark Caruso, Hayden Pitt and Lisa Walker all returning to open Sprintcar action this weekend.

Luke Dillon is another driver who we have seen on track in recent weeks with “The Action Man” circulating the Murray Bridge venue during practice just shy of the official 1 lap track record therefore he will enter this weekend with great confidence.

Now Portland based racer Brock Hallett will be another to watch as he searches for his maiden Sprintcar A-Main victory while Brendan Quinn, Keke Falland, Mount Gambier’s Scott Enderl, Joel Heinrich, Shannon Barry and rookie Austin McDonald will complete the field.

Round 2 of the Formula 500 State Series will also be on the program with another competitive field entered including opening round winner James McDonald. The Victorian will be joined by another highly credentialled racer from across the border with former Australian Champion Dylan Willsher travelling to Murray Bridge to take on Richard Schmidt, Brendan Zadow, Brad Stell and Dean Cottrell.

The Wingless Sprints will once again deliver a great line-up with 20 competitors set to battle it out for the third event in succession and with the opening round of the State Series just around the corner it will be the final chance to dial in their machines.

The evening will also include plenty of entertainment for the sedan fans with Super and Junior Sedans, Street Stocks and AMCA’s also on the huge racing program.

The Street Stock nomination list is currently over 20 cars with Carey Weston looking to win his third Main event in a row, but he may find it a little harder this week with the increased competition. Drew Flatman will also be out to keep his unbeaten record in the Junior Sedans, but Kirra-Lee Pitcher and Aaron Tranter will be out to stop that from happening.

State Champion Ryan Alexander will be hard to beat in the Super Sedan ranks as he spearheads a small but competitive field while State Champion Darren McCarthy and Michael Miller will go head to head in the AMCA Nationals.