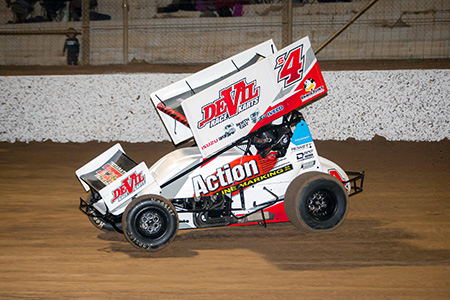 The Murray Machining and Sheds Murray Bridge Speedway season steps up a gear this weekend (Saturday October 5) with the first Sprintcar race of the 2019/20 season. A stout field of 15 competitors, that includes some of the best 360ci Sprintcar drivers in the state, will chase the opening main event win of the local season.

With the 410ci season still a couple of weeks away several of the “open” drivers will bolt in a 360ci powerplant this Saturday night including Steven Caruso, Lisa Walker (pictured), Hayden Pitt and Brendan Quinn. They will join the likes of current and two-time Allstars Champion Mark Caruso, Brendan Guerin, South-East racers Scott Enderl and Ben Gartner, Jamie Hendry, Colin Brooks and Murray Bridge’s own Jarman Dalitz.

Another former Allstar Champion Paul Soloman will add some spice to the field as he travels across the border to take on the locals.

An encouraging aspect of the field is the number of rookies in the field with Clinton Warner and Mildura’s Corey Sandow making their Sprintcar debuts while John “Kiwi” Henderson will return to racing after close to decade out of the sport.

The racing format will see Hot Laps, two rounds of heats and a 30-Lap A- Main.

This Saturday night the Wingless action will continue at Murray Bridge with another strong line-up of 20 drivers nominating. Most of last weekend’s competitors are returning including the top four from last weekend, Mitch Broome, Anthony Tapley, Cory Hodgson and Joel Heinrich all set to take to the track, but the field will be strengthened by the return of multi-time National Champion Joel Chadwick.

Joining Chadwick on track for the first time this season will be the likes of Renee Pestka, Kirby Hillyer, Mick Barker, Jamie Crafter, Normie Moore and Mildura’s Jason Bolitho and Anthony and Melissa McMillan.

The Street Stocks will also return after an entertaining start to the season last Saturday night with Carey Weston being the man to beat after his performance on opening night. Phil Watson will be looking to turn the tables as will Nigel Reichstein who was slightly off his regular pace a week ago. Cade Cox, Nathan Thorne, Matt Maynard, Sam Brumfield and regular Super Sedan driver Jason Gantz will also be drivers to watch in the 17-car field.

A small field of AMCA Nationals will also be on hand but the nomination list consists of some tough racers including former Australian Champion Michael Miller, who returns to the class after his stint in Super Sedans, the current South Australian Champion Darren McCarthy, Jake Armstrong and Victorian Frank Thiery.