Mitch Gets Out The Broome at MMS 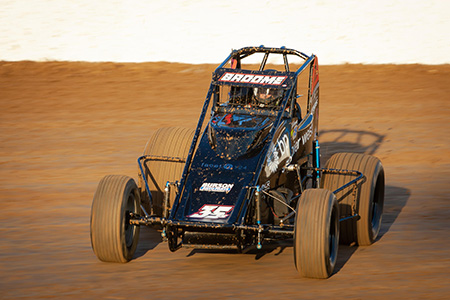 Mitch Gets Out The Broome at MMS

Mount Gambier’s Mitch Broome chalked up the opening Wingless Sprint A-Main of the South Australian season after dominating the 20-lap finale at the Murray Machining and Sheds Murray Bridge Speedway on Saturday night (September 28). After starting on the front row Broome was untroubled throughout the duration going on to win comfortably ahead of Anthony Tapley and Cory Hodgson.

With a couple of late entries, the night began with 19 cars in the pit area, which was an impressive start to the new season. The field was bolstered by several Victorian teams with teenager Blake Walsh, Bendigo racers Boyd Harris, Reece Harris and Jeremy Pearson and Marlin Carrigan-Walsh making to trek to Murray Bridge.

For Walsh the journey was made worth while with an opening heat victory over Jack McCarthy and Anthony Tapley while heat two went to Brad Evans ahead of Mitch Broome and Darryl Sloan.

The second round of heats saw Broome take heat three with Tapley and McCarthy in hot pursuit while the final heat went to local Brett Ireland, who defeated Patrick Monaghan by over 10 seconds.

Therefore, Broome and Walsh stated up front for the final and in the early stages they ran 1-2 until the first and only red light of the evening came on as the field began the second lap. As Jack McCarthy and Joel Heinrich battled for third, they made contact with the result being McCarthy riding out a series of barrel rolls in turn 1.

As a result, Heinrich was sent to the rear of the field and he would eventually fight his way back to fourth, narrowly missing the podium.

For the rest of the event the real emphasis was on who would finish second with Walsh, Tapley and Hodgson involved in a great fight.

As the chequered flag fell it was Broome ahead of Tapley, Hodgson, Heinrich and Walsh with Boyd Harris, who was stepping back from racing 360ci Sprintcars, Darryl Sloan, Marlin Carrigan-Walsh, Brett Ireland, who had a late spin, and an improving Nicole Southby completing the top 10.

This Saturday night the Wingless action will continue at Murray Bridge with another strong line-up. A majority of last weekend’s competitors are returning including last start winner Mitch Broome, Joel Heinrich, Jack McCarthy, Cory Hodgson and Darryl Sloan but the field will be strengthened by the return of multi-time National Champion Joel Chadwick.

Joining Chadwick on track for the first time this season will be the likes of Renee Pestka, Kirby Hillyer, Mick Barker, Jamie Crafter, Normie Moore and Mildura’s Anthony and Melissa McMillan.