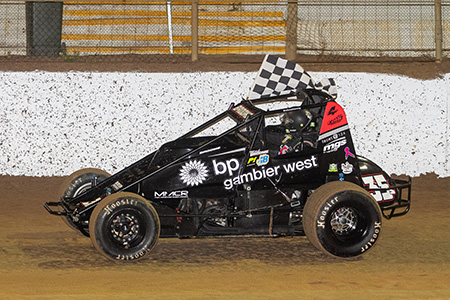 The South Australian Speedway season is officially underway with the Murray Machining and Sheds Murray Bridge Speedway hosting the Moore Mechanical “Rumble on the River” on Saturday night. In front of an encouraging opening night crowd Mount Gambier’s Mitchell Broome and Victorian James MacDonald drove away with the honours in the headline categories on the night.

The Wingless Sprint field was boosted by a couple of late entries producing a strong field with some fantastic racing throughout the night. After four heat races, with victories going to Blake Walsh, Brad Evans, Mitchell Broome and Brett Ireland, Broome and Walsh shared the front row with Broome going on to record a flag to flag win.

But the race behind Broome was quite intense with Anthony Tapley claiming the runner-up position with Cory Hodgson rounding out the podium. After being set to the rear of the field after contact with Jack McCarthy sent the later into a series of barrel rolls in turn one, Joel Heinrich charged back to fourth with the op 10 being completed by Walsh, Boyd Harris, Darryl Sloan, Marlin Walsh, Brett Ireland and Nicole Southby.

Victorian James MacDonald was an easy winner of the opening round of the South Australian Formula 500 State Series after starting from the front row. After an impressive run Richard Schmidt finished second with Shane O-Shae taking advantage of Brad Stell’s late mechanical dramas to record a third placed run ahead of Corey Jones and Declan Robinson. Earlier the heat winners were Brad Stell and Declan Robinson while MacDonald was consistent with a pair of runner-up finishes.

A small but competitive field of Super Sedans were on hand with current South Australian Champion Ryan Alexander keeping a clean sheet with two heat wins and a convincing win the 20-lap finale ahead of Steven Schwartz, Kym Jury and Robbie Marchant.

Throughout the night the Street Stocks provided some great early season action with Phil Watson taking two heat wins while Carey Weston claimed the third. As expected, it turned into a Weston and Watson head to head battle in the 20-lap final with Carey Weston claiming the early season honours over Watson with Jeremy Weston, Nigel Reichstein and Nathan Thorne rounding out the top five.

The Junior Sedan division was dominated by Drew Flatman in his Daihatsu Charade taking both heat races and the feature event. Second in the main went to Chelsea Gwynne with Kirra Lee Pitcher completing the top three.

Both Luke Dillon and Lisa Walker were also on hand for a series of early season Sprintcar Hot Laps with Dillon setting a lap of 10.813 seconds, that was just shy of the official 1 lap track record held by Ryan Jones.

Next Saturday night (October 5) the racing will continue at the Murray Machining and Sheds Speedway with the first Sprintcar race of the season with the 360ci Sprintcars taking centre stage. Currently the nomination list stands at over a dozen cars with teams from South Australia and Victoria set to take to the track in the opening Sprintcar show of the season. Joining the 360ci Sprintcars will be the Wingless Sprints, Speedcars, AMCA Nationals and Street Stocks.