Harper Hot On A Cool Night At MMS 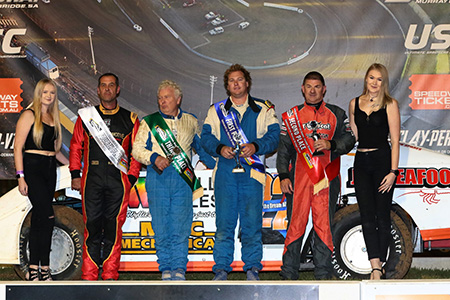 Callum Harper still claims that the Murray Machining and Sheds Murray Bridge Speedway isn’t one of his favourite tracks, but he may be starting to develop a liking for the venue following his win in the Autopro Super Sedan Spectacular, a race that doubled as the John Dawson Memorial. After trailing Dave Gartner for the opening 25 laps Harper made his move for the lead as Gartner’s #8 started to fade leading the remaining 5 laps to win ahead of Gartner in what ended up being a controversial finish.

The race winner was the only driver to officially greet the chequered flag as the caution flew shortly after as both Gartner and Victorian Peter Nicola ended up in the turn four wall as they battled for second. With Nicola being deemed as the cause of the stoppage he was sent to rear of the lead lap cars and Gartner was reinstated into second as the results were taken from the last completed lap.

After dropping a heat and missing the pole shuffle South Australian Champion Ryan Alexander was forced to start the A-Main from the back of the field and his race only lasted 1 lap as he was caught up in an incident on the back straight that was instigated by Mick Nicola suffering a flat right rear tyre after contact with Brown. As Nicola slowed in front of the field it triggered a huge pile up that included Alexander, Kym Cottrell, Eve and Wright.

Earlier the heat winners were Gartner (2), Alexander, Marchant, Harper and Mick Nicola while Gartner defeated Harper in the final of the pole shuffle.

The final Street Stock feature of the season went the way of veteran racer Carey Weston, but he had to work hard in the early stages to fend off Mark Gartner, who would eventually retire from the race. Second would go to Anthony Buchanan with Cade Cox, Craig Buchanan and Haydon Jolly rounding out the top 5 in the 20-lap final that was divided into two segments. The opening 10 laps of the race saw the field race anti-clockwise before the field was turned around after the competition caution.

With the Wingless Sprints being a late addition to the program a small field of seven drivers fronted for the Non-Points race with local resident Brett Ireland winning the 15-lap final ahead of Mick Barker, Brent Fox and Patrick Monaghan.

Due to an accident that required the Ambulance to leave the venue the final of the Demo Derby Team Racing was cancelled leaving no official winner to the inaugural running of the novelty event. Earlier six teams competed in the heat races while the final was to have seen Off Ya Gutz Racing taking on Team Smash.

With the 2018/19 season now officially over sights are now set on next season with an exciting program set to kick off with a practice night on Saturday September 14 before the serious stuff begins on September 28, 2019 with an all sections meeting with Formula 500’s, AMCA Nationals, Wingless Sprints, Junior Sedans, Street Stocks and a Demolition Derby.