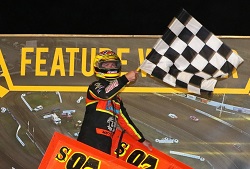 Egel’s victory in the dramatic final A-Main of the season brought him to within 42 points of the Gold Coast based Sydneysider but Farr’s consistency in finishing second in the same race denied the young South Aussie a legitimate shot at stealing the title.

Lisa Walker narrowly missed out on her first USC podium appearance with a strong fourth after starting on the front row with fellow South Aussie Brad Keller. Keller was desperately unlucky after being arguably the fastest car all night.

He set quick time, look rapid in his heats and won the Pole Shuffle before firing off to an early lead and establishing a speedy advantage before a lapped car spun in front of him closing off any emergency exits.

The unfortunate impact saw Keller’s immaculate #19 Shadetec / Bunyip Print entry taken out with damage. Luke Dillon started from the fourth row of the A-Main because of an earlier disqualification in the Pole Shuffle when he ‘broke the belts’ to argue a decision in front of the flag-stand with race officials.

He hustled back to the last step of the podium by the fall of the chequer in a race what was delayed when SA teenager Ben Morris and hard charger Chad Ely crashed and damaged a section of the turn one safety fence.

For Farr it was a satisfying back to back victory in USC SA with the ECP Racing Team but the focus is immediately switched to the remaining USC NSW and QLD titles respectively where he is in a dogfight with at least two different rivals for the points lead.
Despite both of them having a disappointing final round of the series the battle between Daniel Pestka and Ryan Jones for fourth came down the wire with Pestka edging out of their deadlock to claim fourth by a mere two points.

Another of the hard luck stories for the night was third generation racer Marcus Dumesny. Dumesny was charging forward in the Wayne Rowett owned #40 Synpower Maxim and ripped his way into the top three before getting sideways in turn three and four and rolling spectacularly out of the event.

The April 6 event brought the curtain down on another successful running of the Ultimate Sprintcar Championship SA at Murray Machining & Sheds Speedway Murray Bridge.

In all 54 different drivers registered points for the USC SA points this season.

Top Ten in the USC A-Main: