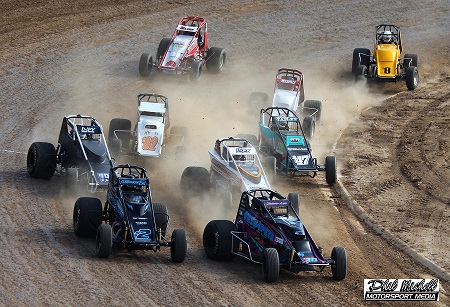 Following the highly successful South Australian Championship a fortnight ago the Wingless Sprints return to the Murray Machining and Sheds Murray Bridge Speedway this Saturday night for their final appearance of the season. Currently the field comprises of 22 nominations and with a couple of the leading drivers competing interstate or opting to sit this event out, this Saturday night may provide a great opportunity for someone to capture their first Murray Bridge A-Main victory.

With Joel Chadwick away contesting the New South Wales State Championship at the Valvoline Raceway in Sydney and Matthew Kennedy out of action following his incident at the State Championship the door has been left wide open for a new winner at MMS. Several drivers will be keen to visit the MMS Victory Lane before the season ends including local drivers Brett Ireland, Robert Heard, who will be substituting for Anthony Tapley, and Brent Fox.

Brad Evans, Jack McCarthy and rookie Mark Taylor will also be out to end their year on a high while Daniel Smith and Normie Moore also can’t be discounted. The South Australian contingent will be joined by several Victorians with Anthony and Melissa McMillian, Jordon Bolitho and Jordan Nicholas.

An encouraging aspect of the nomination list is the number of young lady racers in the field with Renee Pestka, who has been a regular front runner in recent years, being joined by Mildura resident Melissa McMillian, Jaime Lee Andrews and rookies Nicole Southby, Tamika Pitcher and Tish Helyer, while regular 360ci Sprintcar racer Cheian Perrett will take a step back and turn a few laps in her #98 V6 powered wingless this weekend.

Last Saturday night saw a small field head to the Sunline Speedway at Waikerie after the Wingless Sprints were a late addition to programme. For the second time this season Ben Harris emerged with the win leaving him undefeated at the venue this season after winning the feature event back at the February event.