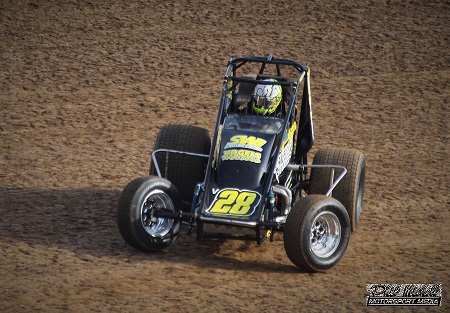 Tom Payet won the A-Main on Night 1 of the SA Wingless Sprint Title (Phil MIchell Photo)
Western Australian Tom Payet stamped himself as a serious title contender after winning the 25 lap Preliminary A-Main at the 2019 South Australian Wingless Sprint Championship at the Murray Machining and Sheds Murray Bridge Speedway on Friday night. After starting from the pole Payet led all 25 laps and in the process, he set a new track record for the race distance.

Second across the line was defending Champion Joel Chadwick with Victorian Champion Luke Storer completing the podium. After starting from position 8 Daniel Storer fought his way into fourth with the lone representative from New South Wales, Jason Bates, finishing in fifth.

In all a total of 47 cars signed in for competition and with a total of 12 heat races were conducted prior to the main event. Throughout the night the racing was first class with four and sometimes five car battles for the lead often seen with several heats going right down to the wire. Luckily very few incidents occurred with most of the leading drivers getting through the heats unscathed, other than Australian Champion Alex Ross, who spun in one of his heats relegating him to the tail of field and subsequently missing a spot in the main event.

The South Australian Title at the Murray Machining and Sheds Murray Bridge Speedway continues Saturday night along with the Ross Wright Memorial for 360ci Sprintcars.